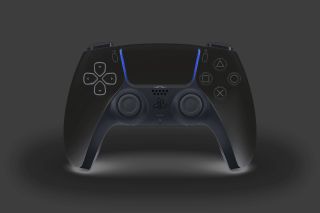 Sony just teased a PS5 DualSense controller in a black color variant — or is it white?

Bill Thomas of our sister site, TechRadar, called the white PS5 DualSense controller "ugly" on the Noise Cancelling podcast. Thomas — and others who share his sentiment — may jump for joy upon hearing rumors of an all-black DualSense model...but not so fast! We have a controversial debate à la Lauren/Yanny on our hands.

At the beginning of May, we reported a juicy rumor that predicted a game-changing, early June PlayStation event. As it turns out, this golden nugget of information was true. PlayStation announced on Twitter that it is poised to hold a Future of Gaming virtual event on Thursday, June 4. The gaming industry is abuzz with excitement as many are expecting a console reveal.

In the tweet's accompanying video, Sony seemingly teased a black PS5 DualSense controller. But many are questioning whether PlayStation simply edited the white controller to give off deceptive visuals.

Is it white or black?

While many are thrilled about the possibility of a black PS5 DualSense controller, others are saying, "Hold your horses! Are you sure it is black?" Some skeptics say that the controller featured in the video is actually the original white DualSense that was revealed in April; the video is simply filled with dark shadowing for an ominous effect.

But in other angles, the DualSense featured in the video looks like an electrifying controller with an all-black design.

Some PlayStation fans praised the new futuristic DualSense controller for its two-tone color scheme and attractive blue accents. But others criticized Sony for deviating away from the DualShock controller's traditional mostly-black design.

Now that Sony may have revealed a black DualSense controller, we sifted through Twitter to determine the critical reception of a darker variant. The consensus among Twitter users on the popular social media platform is that many PlayStation fans are excited about the possibility of snagging an all-black PS5 DualSense model.

Whether you prefer the white variant or the black model, the PS5 DualSense controller is a step up from its last-gen counterpart with features such as haptic feedback, adaptive triggers, a built-in microphone array, a USB Type-C port, a new "Create" button and more.