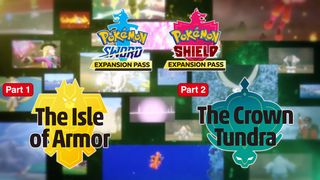 Nintendo unveiled a new trailer for the Pokémon Sword and Shield expansion pass that announces the release date of the Isle of Armor expansion. The additional content is slated to arrive on June 17 while the Crown Tundra expansion will launch in fall 2020.

The latest trailer gives Pokémon fans a taste of what's to come in the next two DLC expansions.

There are two new Pokémon, including Kubfu and its evolution Urshifu, which are beastly looking fighting Pokémon. We also got to see a Gigantamax battle form for Blastoise and Venusaur.

The Isle of Armor will give players access to a new tool called Cram-o-matic, which lets players combine four items to create other gear like Poké Balls and PP Ups. The expansion also features a new dish called Max Soup, which gives select Pokémon the power to Gigantamax

The island will also feature a tutor that'll teach your Pokémon new fire- and grass-type moves. However, you need to pay them using Armorite Ore, an item found on the Isle of Armor. If you pre-order the expanion pass now, you can get both DLCs for $30.