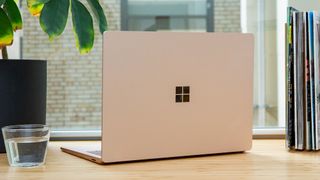 While it's not the flashiest Microsoft laptop or tablet launching this year, the Microsoft Surface Laptop 4 might be one of the most anticipated both because of its traditional clamshell form factor and some of the rumored spec upgrades.

Last year’s Surface Laptop 3 was a beautiful device that made a few nice upgrades and refinements from the previous model, earning it a spot on our best laptops and best AMD Ryzen laptops pages. It appears Microsoft may have a similar trajectory planned for the Surface Laptop 4 this year.

While the exterior design may not be as interesting as the Surface Book 3 or Surface Pro 7, the internal specs are a fascinating story for the Surface Laptop 4 as it is shaping up to be the perfect battleground for AMD and Intel's latest CPUs.

There are no specific rumors addressing the price of the Surface Laptop 4 yet, but Microsoft has been consistent on its pricing through the first three iterations of the Surface Laptop. That said, we expect the laptop will, once again, start at $999 for the 13-inch model and top out at around $2,399 for a fully specced version.

Similarly, we believe Microsoft will hold the line on its price for the 15-inch Surface Laptop 4, which starts at $1,299 and goes up to $2,799. One potential value shift would be a bump to 256GB as the base storage; it’s a move we saw from Apple with the MacBook Air this year and would be even more appreciated on the Surface Laptop 4 given the exorbitant price Microsoft charges for additional storage.

Microsoft has settled into a fairly reliable cadence with its product releases and the Surface Laptop 4 should arrive in early October alongside the Surface Pro 8.

There is, of course, some uncertainty caused by the potential impact of the coronavirus on the supply chain, with devices like the Surface Neo pushed back to 2021. But we wouldn’t predict a similar delay for the Surface Laptop 4.

The Surface Laptop is the lone traditional clamshell laptop Microsoft produces and it is unlikely to get a significant redesign at this time.

Naturally, that doesn’t preclude some changes. Perhaps the most likely (and one of our most desired) is a reduction in the size of the bezels surrounding its PixelSense display. It was one of our primary complaints with the Surface Laptop 3. When compared to the Dell XPS 13, for example, the Surface Laptop 3 bezels look comically large.

If we do see a reduction in bezels, it would mean either a bump up in screen size (perhaps Microsoft beats Apple to its rumored 14-inch MacBook Pro) or a slight drop in the dimensions and weight of the Surface Laptop 4. The latter would be a particularly welcome move for the 13.5-inch model as it would bring it closer to or slightly ahead of some of its slimmer and/or lighter competitors, like the XPS 13, MacBook Pro and HP Spectre X360 13.

Many people are likely hoping to see Thunderbolt 3 make an appearance on the Surface Laptop 4, but given that Microsoft has deliberately avoided Thunderbolt 3 due to security concerns, we aren’t banking on it. There is at least a glimmer of hope that the Kernel Direct Memory Access (DMA) Protection introduced in the Windows 10 1803 update should address the sort of DMA-based attack that motivated the move, but at this point, it seems more likely that Microsoft simply holds out for USB4.

Cosmetically, we aren’t anticipating any changes. The Surface Laptop 3 was a beautiful laptop: the color-matched keyboard and aluminum design gives a premium look and feel. For those that want a softer side to their laptop, we expect the Alcantara fabric interior will still be available as an option.

One slight change could come to the keyboard. It was already absolutely fantastic, so this isn’t really a necessary change, but the Surface Book 3 moved to 1.55mm key travel up from 1.2mm, so perhaps something similar is in line for the Surface Laptop 4.

With little change expected to the exterior, you would have to hope there is a lot of change going on internally for the Surface Laptop 4. The latest rumors suggest that we will not be disappointed there.

The most recent benchmark leaks pitting Tiger Lake against Ryzen 4000 haven't looked great for Intel, but there is still time for corrections and Intel does have its impressive Intel Xe integrated graphics to pull some of the weight. There's no question this will be a truly interesting test for AMD, particularly if both CPU options are available in the 13.5-inch and 15-inch Surface Laptop 4.

The rest of the specs surfaced in the original benchmark leak included 8GB or 16GB of RAM and a choice between 256GB or 512GB of SSD storage. 8GB is definitely feeling a little low for a premium laptop in 2020, but if Microsoft is going to hold the line at $999, it is probably a necessary option. The latter, on the other hand, would be a fantastic sign if it means the 128GB SSD option has been dropped. We’ve seen Apple move to 256GB as the base for the MacBook Air and MacBook Pro in 2020 and, hopefully, Microsoft follows suit.

Surface Laptop 4: What we want

Ryzen 4000 Processors: This is something we want and that is virtually guaranteed, but to be specific, we would like to see an AMD Ryzen 4000 CPU option in both the 13.5-inch and 15-inch Surface Laptop 4. Last year it was limited to the 15-inch model. Ironically, we criticized Microsoft last year for putting AMD chips in the Surface Laptop 3, but those were Ryzen 3000 CPUs — Ryzen 4000 changes everything.

Reduced bezels: I touched on it before, but Microsoft has to address this with the Surface Laptop 4. This is the single truly dated piece of the Surface Laptop design, which has an otherwise sleek and premium look. And again, this would carry some additional benefits with either a size reduction or a slightly larger display.

Higher base storage: The 128GB SSD starting size for the Surface Laptop 3 should not carry over to the Surface Laptop 4, both because that's insufficient storage for a large section of users and because Microsoft charges an outlandish amount of money ($300) to bump up to the more reasonable 256GB option.