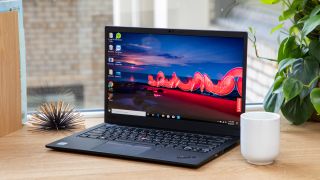 We've got some juicy revelations about Lenovo's 2020 ThinkPad plans and some insight about the Intel Tiger Lake launch date all thanks to a leaked roadmap from a PDF presentation in Germany, NotebookCheck reported.

Lenovo's ThinkPad series is known for its refined black aesthetic, strong productivity, impressive build quality and the show-stealing star, the Thinkpad X1 Carbon. Many ThinkPad devices aren't pocket-friendly, which is why our ears perked up at the mention of an upcoming affordable laptop lineup.

The leaked roadmap unearthed Lenovo's plans to release "affordable" workstation models within the ThinkPad family, including a model called ThinkPad P15v. The "v" in the name signifies that this configuration will be a value version of the higher-priced ThinkPad P15 model. Both models are slated to hit shelves later this year with Comet Lake H-series CPU chips.

NotebookCheck added that Lenovo may also release a refreshed ThinkPad P15v under the T-series umbrella called the ThinkPad T15p. The models will be quite similar, but both will sport different GPUs.

The ThinkPad P15, by the way, will be the successor to the chunky, heavy-duty workstation known as the ThinkPad P53, which hints that Lenovo has adopted a new naming convention. The upcoming Lenovo ThinkPad P17 will succeed the ThinkPad P73 -- another example of Lenovo's naming shift.

Intel Tiger Lake chips may be coming this fall

Lenovo, according to the roadmap, is expecting the 10nm Intel Tiger Lake chips and the lower-powered Lakefield CPUs to launch in September or October. The Chinese tech giant plans to release several models with the highly anticipated hardware, including the X1 Fold.

We're quite familiar with the X1 Fold -- we got our hands on the Lenovo product at CES this year. Touted as the world's first foldable PC, the Windows 10 device is expected to set you back a whopping $2,500. The X1 Fold, according to Liliputing, will sport an Intel Lakefield five-core processor.

The ThinkPad X12, featuring a 12-inch display, is particularly eye-catching because it's a detachable device reminiscent of the Microsoft Surface-style design.

With Lenovo poised to release at least 16 new laptops this year, there seems to be an option for everyone -- from the stunning, break-the-bank X1 Fold with its foldable OLED display to the budget-friendly ThinkPad P15v.

Intel Tiger Lake chips will debut on Lenovo's most premium models, and we're excited to see how the follow-up to the 10th-gen Ice Lake processor family performs on our real-world testing.

It's also worth noting that Intel isn't the only processor that Lenovo will stuff into its products this year -- AMD will get some shine as well, especially for a few models in Lenovo's T and L series device line-up.

We can't help but wonder if any of the upcoming additions to Lenovo's portfolio will make the same waves as its X1 Carbon superstar.