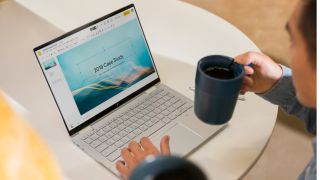 HP announced a new fleet of Chromebooks for enterprise users, ranging from a $400 entry-level device to a premium business laptop with features typically found only on Windows 10 machines.

Chromebooks have found success in the K-12 education sector and as cheap alternatives to Windows PCs. Now vendors are branching into higher price brackets and adding new features and specs we haven't seen before in Chromebooks. No Chromebook has found its way onto our best business laptops page, but HP could be on the brink of a breakthrough.

If you're an IT manager moving from Windows 10 to Chrome OS and don't want to compromise on performance or features, then the Elite c1030 Chromebook Enterprise is the way to go.

The Elite c1030 Chromebook Enterprise will ship in August. HP has yet to announce pricing, but we suspect higher-end configs to be at or more than $1,000.

Why such a high price? Because the laptop has a sleek aluminum chassis, 10th Gen Intel Core CPUs and loads of security features. Let's start with the design. As a 2-in-1 laptop, the Elite c1030 Chromebook Enterprise can convert into a tablet or be used in tent mode when presenting slides. Its silver aluminum chassis is just 0.6 inches thick and weighs just 3 pounds. For ports, you get two USB-C inputs, one USB Type-A port, a microSD card slot and a headphone jack.

The Elite c1030 Chromebook Enterprise has a 13.5-inch, 1080p touchscreen display with a 3:2 aspect ratio, which should be great for reading documents. We're glad to see near-invisible bezels surrounding the display. In fact, HP claims the Elite c1030 Chromebook Enterprise has the highest screen-to-body ratio (90%) of any Chromebook.  Not only does an edge-to-edge screen provide a better viewing experience, but it also reduces the overall size of the laptop.

You can configure the Elite c1030 with up to a 10th Gen Intel Core i7 CPU. HP is using Comet Lake chips, so expect class-leading performance combined with weak integrated graphics. The Elite c1030's battery life is rated at 12 hours and you can charge it up to 90% in 90 minutes.

This all sounds great but the security features are what make the Elite c1030 Chromebook Enterprise stand out from something like the Dell Latitude 5400 Chromebook. The coolest feature is the HP Sure View Reflect privacy screen, which, when enabled, reduces viewing angles so people can't peek at your screen. The Elite also comes with a webcam privacy switch that kills power to the front-facing camera, and a fingerprint sensor. On top of all that, the Elite c1030 Chromebook Elite is tested to 19 military-grade durability tests.

It's not something you'll notice when using the laptop but I'd be remiss not to mention that 75% of the aluminum lid and 50% of the keyboard plastics are made from recycled materials.

Also unveiled today is the Pro c640 Chromebook Enterprise. This mid-tier notebook will be released in June; Pricing has not yet been announced.

HP is touting the Pro c640 Chromebook Enterprise as the thinnest 14-inch business Chromebook around. We don't doubt those claims given how few laptops fall into that category. Regardless, at 0.65 inches, the 3.4-pound C640 is a fairly portable notebook. While it's not a 2-in-1 laptop, the Pro c640's lid can fold flat.

According to HP, the Pro c640 Chromebook Enterprise was designed for working in the cloud. It comes with 10th Gen Intel Core CPUs (HP didn't specify which SKUs), up to 16GB of RAM and up to 128GB of eMMC storage. Battery life is rated at 12 hours.

Like the Elite c1030 Chromebook Enterprise, the Pro c640 passed military-grade durability tests, so it can withstand extreme environments. It also has a spill-resistant keyboard for when you inevitably spill your coffee while working at home.

HP Chromebook Enterprise 14 G6, the cheapest of the bunch, costs just $399 and is available today.

Of the laptop announced today, the Enterprise 14 G6 is closest to the Chromebook stereotype. It's cheap, durable and should offer long battery life. Just don't expect blistering performance or an HDR display.

As you can see from the above image, the Enterprise 14 G6 trades aluminum for black plastic. While it might not feel as premium as the other laptops mentioned, the 14 G6 also passed MIL-STD 810G tests and drop tests from 27 inches thanks to its metal-reinforced corners. It, too, has a spill-resistant keyboard and an optional privacy camera.

On the inside is an Intel Celeron processor, a notable step down from 10th Gen Core processors. The 14 G6 is also limited to 8GB of RAM and up to 128GB of eMMC storage. Battery life is rated at 13.5 hours.

We're particularly interested in the Elite c1030 Chromebook Enterprise, which has nearly all the features (it's missing an IR camera) we've come to expect from a high-end Windows 10 business notebook. We'll see if it can stand up to the likes of the Lenovo ThinkPad X1 Carbon or HP's own EliteBook 840 G5 once we get a unit for review.