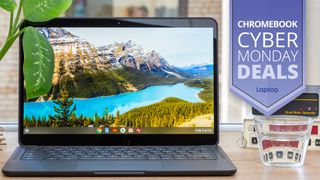 Black Friday? That's so yesterday! Now, it's all about the Cyber Monday and the onslaught of deals. The rush of Cyber Monday deals has arrived, and Cyber Monday Chromebook deals are flooding the gates.

Sure, Chrome OS is basically an operating system stripped down to everything but Chrome, but as a result, Chromebooks are incredibly inexpensive. And there's something to be said about the reliable security and long battery life found in Chromebooks, which make great budget laptops.

Chromebooks also have access to the Chrome Web Store, which offers some useful plugins, as well as the Google Play Store, which gives you access to a plethora of Android apps.

This is the time of year to snag the best Chromebooks for a great price. Chromebooks are great for kids, teens and even adults who just need something affordable and simple. To help you save some money, we're compiling the best Cyber Monday Chromebook deals you can get right now.

Asus Chromebook C425: was $449 now $279 @ Walmart
This deal gets you a modern Chromebook at a very low price. Asus' Chromebook C425 flaunts an edge-to-edge 1080p display and packs a generous 128GB of storage. View Deal

Google Pixel Slate (Core i5): was $999 now $622
Google's first attempt at a tablet, the Pixel Slate has an elegant design, a sharp screen and a comfortable keyboard (sold separately). It also lasts 10 hours on a charge. View Deal

Acer Chromebook Spin 11: was $299 now $179 @ Walmart
As the name suggests, the Acer Spin is a convertible, which means it can transform from a traditional laptop to a tablet. In addition to its 11.6-inch screen, this Chromebook packs a Celeron N3350 CPU, 4GB of RAM, and 32GB of storage.View Deal

Acer Chromebook R11: was $299 now $268 @ Amazon
The Acer Chromebook R11 offers versatility and an estimated 10 hour battery life, making it ideal for school, work or play. This Celeron-powered convertible has 4GB of RAM and 32GB of storage.View Deal

Dell Chromebook 11 3000: was $355 now $249 @ Dell
This durable Chromebook can take whatever your kids can dish out, including drops and spills. And the specs are solid for the price, including a Celeron CPU, 4GB of RAM and 11.6-inch HD display.View Deal

Samsung Chromebook 3: was $299 now $142 @ Amazon
There are several versions of the Samsung Chromebook 3, but this is one of the fastest. If you want to have many tabs open, or run Android games, you'll want to carry this laptop's Celeron N3060 CPU, with its 4GB of RAM. It weighs only 2.5 pounds. View Deal

HP Chromebook 14: was $279 now $179
In our HP Chromebook 14 review, we actually gave the laptop 2 out of 5 stars, not recommending it for its dull display, below-average battery life, middling performance and poor speakers. We suggest avoiding this deal.View Deal