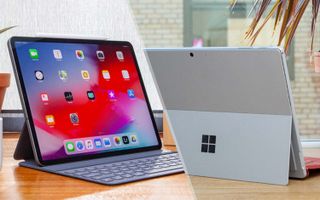 Microsoft's new Surface Pro 7 is similar to its predecessor but introduces a few useful features, including a USB-C port and speedy 10th-Gen processors. Unfortunately, the Surface Pro 7 doesn't have the same endurance as the previous model, opening the door for other tablets and 2-in-1 laptops to take Microsoft's throne.

Chief among the competition is Apple's 12.9-inch iPad Pro. Unlike the Surface Pro 7, the latest iPad Pro received major updates when it was released last year. With a slimmer, lighter design, an improved Apple Pencil and a USB-C input, the iPad Pro is a more competitive alternative to the Surface Pro than ever before.

Here is how the Surface Pro 7 fares against the 12.9-inch iPad Pro.

This slim magnesium slate has a shiny Microsoft logo on the rear kickstand, which folds out so you can prop up the Surface Pro 7 and use it as a laptop. Doing so requires an all-important, yet still-optional Type Cover keyboard, which is available in a rubber, black version or with an attractive and comfortable Alcantara finish.

The Surface Pro 7 is by no means an ugly tablet, but its thick bezels don't cut it in this day in age. Apple got the memo and made wholesale improvements to the iPad Pro's design, changes that resulted in a sleeker, more portable tablet.

The new iPad design starts with thin display bezels, which draw your eyes toward a large, 12.9-inch display and reduce the tablet's overall footprint. Doing so meant ditching the Home button, a worthwhile concession for a more modern design.

The industrial design of the iPad Pro won't please everyone, but its practicality will win you over. One especially useful feature is the ability to charge the Apple Pencil wirelessly by magnetically attaching it to one edge of the tablet. Surface Pro 7 users will need to stock up on AAAA batteries to keep the Surface Pen powered.

It took longer than we hoped, but USB-C is here.

Both the Surface Pro 7 and iPad Pro added the port to their respective tablets. Neither slate has Thunderbolt 3, so you won't get the fastest transfer speeds. Regardless, USB-C is better than any proprietary solution.

As a laptop replacement, the Surface Pro 7 gives you more connections to work with, including a USB 3.1 Type-A port, a headphone jack and a microSD card slot. For better or worse, the Surface Pro 7 still charges via a magnetic Surface Connect cord, not USB-C.

USB-C is all you get on the iPad Pro, which doesn't even have a headphone jack.

Both tablets have gorgeous displays, but the iPad Pro's 12.9-inch Retina panel edges out the Surface Pro 7's screen.

According to our colorimeter, the iPad Pro's display covers 128% of the sRGB color gamut, making the Apple display more colorful than the Surface Pro 7's screen (102%) and nearly even with the category average (129%).

You shouldn't have any problems using either display outside, thanks to their impressive brightness. The iPad Pro peaked at a blinding 484 nits, whereas the Surface Pro 7 illuminated to 395 nits. Both results are above the 348-nit category average.

MORE: Can the iPad Pro Replace Your Laptop? Here's What 3 Pros Think

Microsoft's Surface Pro 7 will maintain an advantage in this category until Apple pairs the iPad Pro with a better keyboard.

We have several problems with the optional Smart Keyboard Folio ($199). Not only is Apple's accessory $70 more expensive than the standard Surface Pro Type Cover ($129), but it doesn't even have a touchpad for cursor support. And as we noted in our iPad Pro keyboard face-off, the Smart Keyboard Folio's keys aren't particularly comfortable to type on.

In contrast, the Surface Pro 7's Type Cover keyboard is the best detachable keyboard we've ever used. The accessory's backlit keys are large and well spaced, and they offer surprisingly deep travel. You can even upgrade to the fancy Alcantara fabric "Signature Type Cover" and still pay less than you would for the Smart Keyboard Folio.

If you prefer handwritten notes, you'll need a good stylus. Here, Apple wins. Although the Apple Pencil ($129) is pricier than the Surface Pen ($99), the Pencil's wireless-charging capabilities will save you money in the long term. The Surface Pen is a perfectly capable stylus, but it relies on AAAA batteries and its buttons feel clunky compared to the Apple Pencil's intuitive touch controls.

Apple's beastly, 7-nanometer A12X Bionic chip pushes the iPad Pro past the Surface Pro 7, not to mention most premium laptops.

The iPad Pro also dominated in our video-transcoding test, converting a 4K video into 1080p resolution in just 7 minutes and 47 seconds. That is much faster than the shortest time we clocked on the Surface Pro (32:47), although our test results were inconsistent. To get a better idea of the iPad Pro's incredible speeds, compare it to the Surface Pro 6, which needed 23 minutes and 22 seconds, right around the category average (22:28).

Apple and Microsoft designed these two tablets for professionals, or the sorts of folks who can afford to spend big bucks on work equipment. As such, the Surface Pro 7 and iPad Pro are more expensive than your average tablets.

Apple's 12.9-inch iPad Pro wins this face-off, cementing that slate's status as the best tablet you can buy (especially if money isn't a factor). With a slim, modern design, outstanding performance and incredible battery life, the iPad Pro exposes the Surface Pro 7's shortcomings better than any other tablet.

That being said, the iPad Pro doesn't offer full cursor support, so the Surface Pro 7 with the excellent Type Cover keyboard is the better option if you want a true laptop replacement. Microsoft's tablet is also cheaper, although you'll still spend around $1,000 once you throw in the optional accessories.

Overall, the iPad Pro (12.9 inch) is the more well-rounded tablet, largely due to its faster performance and much longer battery life.