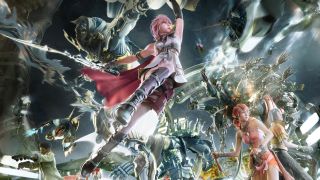 For hardcore Final Fantasy fans, the excitement surrounding Final Fantasy XIII was thunderous. Launched in 2009, it was meant to usher in a new generation of high-quality JRPGs, and a number of gorgeous trailers only managed to heighten the hype.

When the game launched, it smashed sales expectations and had the highest selling first week of any game in the franchise at the time. However, reception was mixed. Fans criticized it for linear level design, auto-pilot combat and a trite narrative. Even though it received generally positive reviews from critics, Final Fantasy XIII is still known to many as the start of a decline for the franchise.

However, I adamantly believe Final Fantasy XIII is a good game and rarely gets the credit it deserves. With today being the 10th anniversary of its worldwide release, let's celebrate a significant experience for me and so many others.

Surprisingly, Final Fantasy XIII was my introduction into the franchise. I vividly recall my 14-year-old self browsing the PlayStation Store when I came across XIII-2’s demo. After an exhausting day at school, I booted up XIII-2 and fell in love. That same night, I ran to my nearest GameStop and picked up a Greatest Hits edition of Final Fantasy XIII.

After 50 hours of in-game playtime, I was swept up by its gorgeous world, awesome soundtrack and stylish battle system. Shortly after, I started Final Fantasy XIII-2, and my journey with the franchise continued.

Other fans weren’t supportive when I’d show enthusiasm for XIII, saying instead that it’s easily the worst in the series. My attempts to defend Final Fantasy XIII would frequently be discredited because I had never experienced the rest of the franchise. Out of childish spite, I went back and got into Final Fantasy VII, which then led me to I, II, III, IV, V, VIII, IX, and XIV just to prove them wrong.

Now, with a pretty significant chunk of the franchise under my belt, Final Fantasy XIII is no longer even close to being my favorite. However, it’s still an incredibly important experience to me.

Final Fantasy XIII takes place on Cocoon, a floating continent under the control of an oppressive theocracy called Sanctum. The game begins with one of many main characters, Lightning, initiating a coup against the government after the kidnapping of her little sister, Serah. Simultaneously, a handful of rebels who are sick of Sanctum’s oppression band together in an attempt to overthrow their oppressors. However, each party member is branded as a l’Cie, a being that is granted great power to fulfill a “focus." If they fail, they’re turned into mindless monsters. As a result, the party must divert their attention to escape their fate.

Final Fantasy XIII has a colorful cast of characters. Lightning is a powerful soldier with a cool exterior, but has a soft spot for her sister and a desire to help people. Snow is a boastful hero who is hellbent on protecting his friends no matter what, akin to most anime protagonists. Sazh is incredibly charismatic and kind, taking care of a baby chocobo who often nests in his afro. Hope is just a shy kid, too frightened to fight on his own and unwilling to speak up for himself. Fang is the only one who lacks any generic traits, as she’s loud with a distinct Australian accent, a blunt attitude and an iron fist. And finally, Vanille is incredibly peppy and teeming with energy, often acting as silly as possible in an attempt to add mindless humor.

Final Fantasy XIII has a lot of personality thanks to this unlikely group, and how these characters clash is a significant theme. They barely get along, yet they have to stick together due to their unfortunate circumstances. Lightning’s boldness is constantly at odds with Hope’s timidness. Snow was set to marry Serah, but Lightning was never particularly fond of this arrangement. Vanille and Fang are the only two characters that get along particularly well, but that might be because they’re romantically involved, although it’s never explicitly stated.

Final Fantasy XIII is frequently criticized for its Auto-battle feature, where a computer decides which attacks your party uses depending on the circumstances of battle. This results in hundreds of encounters where all the player does is spam the Auto-battle button to win. This does get a bit monotonous, but it’s not particularly divergent from the usual tedium of the franchise.

With the release of Final Fantasy VII, the series took a turn toward mindless combat. While games like FFIV require careful planning and preparation to survive treacherous dungeons, PS1-era Final Fantasy is more concerned with presentation, world-building and character development. These entries have fun battle systems in place, but they’re rarely applied in ways that challenge you.

With Final Fantasy XIII, this philosophy changes for the better. Instead of choosing between dozens of overpowered spells and abilities with little tactical application, the game automatically determines what works best in your current situation. With the addition of Paradigms, party members can shift classes mid-combat, each providing a set of new abilities. Furthermore, characters have an incredibly important skill tree and a handful of items to change the tide of battle.

As a whole, combat is more about preparation and a mindful understanding of strengths and weaknesses. You might find yourself spamming Auto-battle frequently, but encountering a challenging boss and having to figure out which party members, Paradigms, items and abilities work best is way more tactical than Final Fantasy XIII gets credit for.

This is not to say that Final Fantasy XIII has a better combat structure than games like Final Fantasy VII, merely that it’s applied in ways that are more effective and challenging.

As much as I like Final Fantasy XIII, it’s difficult to deny that it’s a devolution of the series in some ways. Final Fantasy has always been known for large open worlds, where various abilities and gadgets are paramount to area progression. Cars, airships, submarines and even chocobos change how you interact with the environments, allowing the player to explore locations previously unseen. NES and SNES Final Fantasy games are especially strict with this, expecting the player to determine how to venture through the world with very few hints.

However, Final Fantasy XIII isn’t an open world game. Exploration is linear and the player is frequently caged to a single, rigid path. There’s little sense of adventure, as items are poorly hidden and secrets are minimal until post-game. The player is stripped of the ability to progress at their own pace due to a mostly scripted experience system. There are ways to farm, but for the most part, you’re trapped within the area you’re currently traversing. As a result, Final Fantasy XIII merely conjures the illusion of an RPG. It looks like one and plays like one, but it doesn’t feel like one. The role you play is unaltered by your decisions, and there’s really no way to shift that.

After beating Final Fantasy XIII, however, the player is thrown into a vast field of powerful monsters, game-changing unlockables and well-hidden secrets. This is the only open area and it boasts many traits the game is criticized for lacking. The exclusion of these attributes for nearly 50 hours of in-game time was already jarring, but for it to be bundled with the post-game is even moreso.

Final Fantasy XIII’s finale and last boss, Orphan, is by far the most intense portion of the game. This is mostly due to it being a two-phase battle, where both sections are distinct.

The player is expected to switch their strategies on a whim, and at this point in the game, they’ll have access to a ton of abilities for in-depth battle plans. This final boss is the most memorably difficult fight in the franchise, as any misstep could send you back to the beginning.

I’m an incredibly masochistic video game player, so this entire encounter is my favorite moment of Final Fantasy XIII.

Walking through Hanging Edge and fighting giant military machines over the dimly lit railways and collapsed bridges in the first chapter is so vivid. Many pre-rendered cutscenes are undeniably gorgeous, and Final Fantasy XIII was graphically ahead of its time. Exploring the world is often less compelling, but its many visual moments stand out.

Additionally, Final Fantasy XIII’s soundtrack is incredible. The main battle theme, “Blinded by Light,” feels so unique in its use of strings and horns. What’s conveyed over this soundtrack is organic, with songs like “Lake Bresha” and “Nautilus” immediately calling upon a positive high energy. Other times, however, tracks like “Ragnarok” conjure a haunting operatic ensemble. Many of these pieces contribute significantly to giving Final Fantasy XIII its fresh atmosphere.

Do I still recommend it?

Final Fantasy XIII is underrated. Sure, it’s not the best in the series, as it stumbles in its level design and lack of an open world, but there’s a lot to like here.

The genuinely challenging battle system, gorgeous visual design and diverse cast of characters truly bring it to life. It can get monotonous and drag on a bit, but getting thrown into its world was incredibly memorable.

I wouldn’t recommend starting with Final Fantasy XIII if you’re new to the franchise, but I do think hardcore fans should give it a chance.