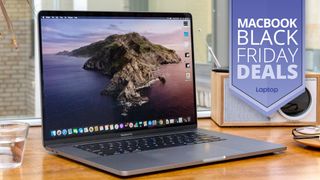 Update: Black Friday is over but you can still find deals at our best MacBook Cyber Monday deals page.

MacBooks, they're powerful, sleek and super expensive. Bargain shoppers will be glad to know that the iconic are among the best Cyber Monday deals right now. Yes, retailers are giving huge discounts right now in anticipation of Cyber Monday. Thanks to the early bounty, we're seeing frequent price drops ranging between $100 - $600 on Apple laptops as we kick off the holiday shopping season. Retailers are also serving up big savings on a number of iPads as well.

We're also seeing great savings on the new 16-inch MacBook Pro and the latest 13-inch MacBook Pro since both have already received discounts. And when Monday actually gets here, you can bet we're going to see even better deals, ushering in a new wave of MacBook discounts.

Traditionally, the best MacBook Cyber Monday deals come from Apple-authorized retailers like Amazon and Best Buy. But with all these deals launching at lightning speeds, which Cyber Monday deals are real and which ones are a bust? Read on to find out.

Apple AirPods Pro: was $249 now $235 @Amazon
The AirPods Pro offers great noise cancelling, a comfortable fit with multiple ear tips, and a sweat- and water-resistant design. The wireless charging case will let you play music for up to 24 hours.View Deal

Apple Magic Mouse 2: was $79 now $59 @ Amazon
The wireless and rechargeable Magic Mouse 2 eliminates the need for batteries. It works with MacBooks running Mac OS X El Capitan 10.11 and later. Snag one now for $20 off at Amazon. View Deal

The 2019 MacBook Air packs everything you could ever want in a stylish ultra-portable. In our MacBook Air 2019 review, we were impressed by its crisp, high-res screen, and strong audio quality.

The 2019 model sports True Tone technology, which adjusts the Air's screen based on ambient lighting. It's not a must-have feature, so we'd opt for the cheaper 2018 MacBook Air. Otherwise, both models pack a 13.3-inch Retina display, 1.6GHz dual-core Core i5 CPU, 8GB of RAM, and a 128GB SSD.

If you want a Mac with more punch than the MacBook Air, you'll want a MacBook Pro. Apple's top-tier laptop comes with a 13-inch, 15-inch display or 16-inch display. These machines also offer more powerful Intel CPUs and in some cases, dedicated graphics cards.

The MacBook Pro is one of the best laptops for video editing and the best MacBook Pro deals are usually found at Amazon and Best Buy. The former is currently taking $140 off the new MacBook Pro 16-inch. The latter has taken from  $100 to $500 off Apple's MacBook Pro. If you're looking for the cheapest MacBook Pro possible, look for deals on the 13-inch model, which has hit $999 in the past.

Laptop Mag is supported by its audience. When you purchase through links on our site, we may earn an affiliate commission. Learn more here.