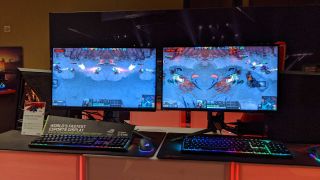 Monitors were the spotlight for gamers at CES 2020, not laptops. Instead of packing more pixels, this year's premium products were all about having the fastest refresh rates. We saw 240Hz and 300Hz panels at the show but Asus took the crown with its 360Hz ROG Swift gaming monitor.

You're probably wondering what, if any, benefits there are to buying a gaming monitor with a 360Hz refresh rate over one that tops out at 144Hz. So did we. Fortunately, Nvidia showed the Laptop Mag team a demonstration comparing the 360Hz monitor with monitors sporting 60Hz, 144Hz and 240Hz refresh rates.

Before we get into our impressions of the 360Hz monitor, let's go over what refresh rates mean for gaming and picture quality.

What is refresh rate?

The refresh rate is the number of times per second that a TV or monitor redraws, or updates, an image on the screen. When a screen has a 144 hertz (Hz) refresh rate, it means that the image is refreshed 144 times every second. Flashing these still images at a rapid rate creates the illusion of motion. At 360Hz, a monitor refreshes its frames in less than 3 milliseconds.

The quicker a screen refreshes, the better it can keep up with fast-paced action. Monitors with fast refresh rate will have a smoother, sharper picture and less motion blur when an object is flying across the screen.

If this is hard to visualize, you can think of refresh rate as the speed that you turn the pages on a flipbook. The faster you flip the pages, the more those individual images morph into an animation.

Probably not. But that depends on several factors. If you're not a competitive gamer or don't play fast-paced games like first-person shooters, then refresh rates higher than 144Hz are overkill.

You also don't need a 240Hz, 300Hz or 360Hz display if the PC you're playing on, or the game you're playing, doesn't support fast refresh rates. For example, if your discrete graphics card plays a game at only 30 frames per second, then your monitor doesn't need to refresh as often to make the game appear crisp and smooth. Some games bottleneck you to a maximum frame rate, so there isn't even a way to get past 200Hz.

Pricing and availability are also constraints. Most premium gaming monitors have a refresh rate of 144Hz, while budget panels are below 100Hz. The newest flagship monitors go up to 240Hz, but those typically cost around $500.

Who are these high refresh rate monitors for? Until they drop in price (which could take years), 360Hz monitors are targeted at esports competitors who use powerful gaming rigs and drop graphics settings to maximize frame rate.

If you want to get the most out of a 360Hz monitor, then you need to be playing a game that supports 360 fps, which includes popular esports titles like Overwatch, Fortnite, Rainbow Six Siege and Counter-Strike: Global Offensive.

Nvidia took us into a backroom at CES 2020 and showed us the benefits of a 360Hz display through several demonstrations.

In the first demo, we had 10 attempts to snipe-kill enemies as they flashed across our screen. First, we tried on the 60Hz panel before attempting the same shot on Asus' 360Hz display.

The second demo tested our reaction times. We were told to spin around and shoot at enemies as they appeared. These enemies' unpredictable movements highlighted the smoothness of each monitor.

A third, hands-off demonstration was a continuous loop of an object in a MOBA game moving quickly from one side of the monitors to the other.

Below are our thoughts on how the 360Hz display fared in these demos, and whether we would buy one ourselves.

I can't explain why it works, it just does. One minute, I was scoring a big ol' goose egg while trying to tag sprinting grunts in CS:GO. It was seriously embarrassing. I mean, I've never been a top scorer in multiplayer games, but I at least expect four to five kills. But there I was, in a room of gamers just whiffing every shot. But when I switched from the 60Hz monitor to the 360Hz monitor on the Reaction time test, things immediately improved. When the smoke cleared, I'd gotten a level of redemption, scoring five kills out of a possible 10. I'm amazed that something seemingly so small had that much of an effect on my performance. But the proof was definitely in the pudding.

I had a similar outcome during the Precision test. All I had to do was get a headshot on a relatively slow-moving soldier. Easy-peasy, right? Wrong. After 45 seemingly endless seconds, I had mowed down only eight hostiles. It started off so easy, and then it seemed like the grunts had transformed into Neo –– I couldn't get a bead on those space-bending jerks at 60Hz.

But on the 360Hz display, I was doling out the pain to the tune of 12 soldiers in 45 seconds. And while I can definitely say the graphics on the 360Hz monitor definitely looked better, I had no idea that it could remotely affect my gameplay. Color me impressed.

I was stunned by how much better I did on the 360Hz display than the 60Hz monitor on the reaction time sniping test. In fact, I was so surprised that I started getting suspicious of the test. But Nvidia assured me they weren't playing any tricks. My scores are legit: zero kills on the 60Hz monitor and eight on the 360Hz monitor. It's hard to explain the feeling of playing on these two panels; all I can say is that the enemy seemed to be within my view for a fraction of a second longer on the 360Hz display — and that made all the difference.

The precision shooting test in CS:GO was a bit of a mixed bag. The enemy's movements looked much smoother on the 360Hz panel, but that didn't result in a better score. At least, not in my case. Everyone else I was with who did the same test got more kills on the Asus panel than they did on the 60Hz monitor. I, however, killed two more enemies on the lesser display. Maybe I'm just used to the jittery movements of enemies having played almost exclusively on low-refresh-rate panels.

If you own a 240Hz panel should you upgrade to a 360Hz option? Probably not. The objects flying across both screens in the final demo were smoother on the 360Hz display but you had to look closely to see the difference.

At first, I had my doubts about how much of an impact a high-refresh-rate monitor would have on gameplay, especially because there's only so much our eyes are able to pick up. But, I was blown away by how capable my eyes were in tracking enemies on the reaction-time test in CS:GO. I went from zero out of 10 on a 60Hz monitor to nine out of 10 on a 360Hz monitor when attempting to snipe enemies jumping across a small gap in an alleyway.

On the test where I had to score headshots, I went from 15 kills to 18 kills, which isn't as high of a jump, but it still makes the case for a monitor with a high refresh rate. I'm not sure I would advocate for jumping from 60Hz to 360Hz because a 144Hz monitor might do the job just as well. To top that off, most games won't be able to use all 360Hz unless it is a game like CS:GO or Overwatch. So do I need a 360Hz monitor? No. But do I want one? Yes, please.