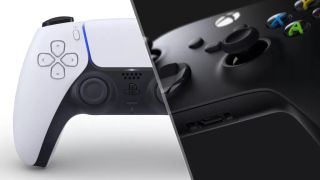 The controller is one of the most critical pieces for any console. After all, it drives every interaction with the game you're playing, so we have gathered everything we know about the PS5 DualSense and the Xbox Series X controller and are pitting them against each other to see which one looks like the early winner.

We already did a deep dive trying to compare every element of the Xbox Series X versus the PS5, but here we are focusing specifically on the controllers. Thankfully, the controller is one of the few areas of the PS5 that Sony has shared a fair amount of detail about already.

At a glance, it's easy to see that Sony has taken a more dramatic change to the look of its controller. But we're going to explore what each company has done to upgrade these critical accessories and answer the question of which next-gen console has the best controller.

The feel of the controller in your hand is undeniably the most important part of the design, but we're months away from determining that important element. For the moment, we are left to look at the appearance and general layout of these two controllers.

Of the two, the PS5 DualSense has made a bolder choice with its design, specifically the default colorway that Sony unveiled. The controller is predominantly white with black accents and the familiar blue lighting now emanates from around the central touchpad rather than on top like the light bar of the DualShock 4.

The PS5 DualSense has taken the basic design of the DualShock 4 and smoothed out some of the bumps and ridges and ended up with something slightly smaller and a bit closer to the Xbox controller in form, while still retaining enough of its design language to be easily-recognizable as a Playstation controller even without the prominent PS logo.

Winner: Draw. While I appreciate the look of the PS5 DualSense, I don’t see a clear winner here. The design is purely subjective as both have gravitated to a very similar appearance with the primary difference being the presence of the touchpad on the PS5 DualSense and the offset versus parallel thumbsticks.

Neither company is shaking things up here; the traditional four-button layout to the right, four triggers at the top and a d-pad are all present.

The PS5 DualSense (in the lone colorway option we’ve seen so far) drops the traditional colors on its buttons in favor of a monochrome pallet. While the triggers don’t appear outwardly different from the DualShock 4, Sony tells us they offer adaptive resistance, allowing developers to customize the behavior based on in-game activity. One example offered was increasing tension to draw and fire a bow and arrow.

The middle of the PS5 DualSense controller is dominated by a slightly larger touchpad with the built-in mic and speaker immediately below it, flanked on either side by the Options and Create buttons. Create takes the place of the Share button from the DualShock 4. Sony made some bold, albeit vague statements about its functionality, but have yet to fully outline what it will offer beyond the ability to share clips or screenshots from games.

The biggest change on the button front for the Xbox Series X is the inclusion of the aforementioned share button found dead-center on the controller. To the left and right of it are the same view and menu buttons, respectively. Depending on your usage, this may not be relevant, but it’s a massive change that needed to be addressed as both the PS4 and Nintendo Switch already offer dedicated share buttons.

One other notable change for the Xbox Series X controller is the new hybrid d-pad, which is a partial step toward the Xbox Elite Wireless controller and should offer a greater degree of control for diagonal input. A textured finish has also been added to the triggers for added grip and feel. The Xbox team also claims to have improved latency, further reducing the delay between a button press and on-screen response.

And while there have been no specific updates regarding the haptics on the Xbox Series X controller or triggers, it's worth noting that even the Xbox One controller is capable of some level of varied resistance, just not to the degree that Sony has indicated possible with the PS5 DualSense.

Winner: PS5 DualSense. Sony has clearly done more here to advance the PS5 DualSense, with features like the adaptive triggers and refinements to the underused touchpad. On the other hand,  the Xbox Series X controller is largely just catchup with the table-stakes inclusion of a sharing button.

Console manufacturers build some excellent controllers and many of us wouldn’t mind using a console controller for gaming on our laptop as well. So, what is the compatibility situation like for the next-gen controllers?

Despite Sony offering a relatively thorough look at the PS5 DualSense controller, it did not address specifics regarding compatibility with either the PS4 or, more importantly, with PCs. Given that it was easy to connect the DualShock 4 to a PC, we hope this will be possible again. We just don’t have official confirmation at this time.

Winner: Xbox Series X controller. Most people aren't concerned with whether the controllers will work on the previous generation consoles, but PC support is a big deal for many users. Until there is official confirmation from Sony that this is supported on the DualSense, this round puts the Xbox Series X in the win column.

The PS5 DualSense went the expected route by using an internal battery that will recharge via USB-C. There are no details yet on the size of the battery, but hopefully, the reduction in the size of the light bar will give the PS5 DualSense a slight bump from the often less-than-stellar DualShock 4 battery life. Thankfully, the controller should charge considerably faster over USB-C.

The Xbox Series X controller will rely on AA batteries, just like its predecessor. The Xbox team reportedly looked at research indicating that the gamer community was split right down the middle on preference for AA versus an enclosed rechargeable option, so the company has opted to ship with AA and offer an optional rechargeable pack for those who prefer that. Those that go the rechargeable route will also rely on the USB-C port on the top of the Xbox Series X controller.

Winner: Draw. For some, the flexibility offered by the AA battery option of the Xbox Series X controller will give it the edge, but if you prefer a rechargeable option, you are immediately on the hook for the added expense of a rechargeable battery pack. The tie-breaker will come down to battery life and neither company has released any information there yet.

I already mentioned the adaptive triggers, but the PS5 DualSense also features a much more advanced haptics engine designed to let developers give players a more immersive experience. The primary example is a driving game where the player could discern various types of terrain like loose dirt tracks versus pavement.

Another unique feature of the PS5 DualSense is the built-in mic, which should be a nice convenience for quick chats or messages when you don’t have your headset handy, but could possibly be leveraged for more advanced features in the future.

While on the subject of headsets, both controllers still feature a 3.5mm headphone jack, so no need to jump to a wireless headset just yet.

On the Xbox side, I struggle to call it an extra feature and I already referenced it, but the Xbox Wireless Protocol is noteworthy for its further reduction of latency as well as extending support for Xbox One controllers to the Xbox Series X.

Winner: PS5 DualSense. Easy win for the PS5 DualSense on this one, the Xbox Series X controller may execute well on the basics, but it doesn’t really offer much in the way of extras.

Neither company has released a standalone price for its next-gen controllers, but according to a rumor from reliable leaker IronManPS5 the PS5 DualSense will come in at the same $59.99 as the DualShock 4.

Our expectation is that Microsoft will probably follow suit with the Xbox Series X controller at $59.99, just like the Xbox One controller.

Winner: Draw. Nothing official yet, but given the current rumors and the pricing on the present generation controllers, we will be surprised if this doesn't end in a draw.

While the Xbox Series X has taken the crown for the most powerful next-gen console, when it comes to the controllers, Sony claims the top spot based on what we know today.

In virtually every respect the PS5 DualSense is the more advanced controller that feels more fitting for a next-gen console. The Xbox Series X controller seems like a mid-cycle refresh with slight refinements and nothing much new to speak of.

Some features like the built-in mic in the PS5 DualSense will be valuable day one, but other advancements will require developer buy-in, which can be hard to predict. The touchpad in the DualShock 4 never saw wide adoption by developers and it’s possible the new touchpad or even the enhanced adaptive triggers and haptics follow a similar fate.

Ultimately, while the PS5 DualSense is the more impressive controller out of the gate, this could all change once we’ve gotten our hands on these controllers and seen if developers leverage the special features that Sony has delivered.