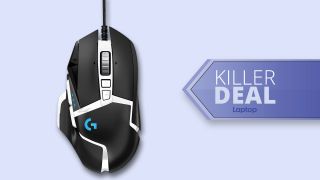 Black Friday isn't here yet but the deals won't stop until both of us are broke, and right now you can pick up the Logitech G502 SE Hero for just $35. At $45 off, you can get one of Logitech's best gaming mice — the one I'm using right now — at a very low price.

Logitech G502 SE Hero: was $80 now $35 @ Amazon
You can pick up the Logitech G502 SE Hero wired gaming mouse for 56% off on Amazon. It's super comfortable, offers a customizable scroll-wheel and even lets you put weights in it to make it feel heavier in your hands.View Deal

The Logitech G502 SE Hero is one of the best wired gaming mice I've ever tested before. The mouse's premium metal scroll-wheel is adjustable with a simple button. The mouse also comes with little weights that can be added to the bottom to make it feel heavier.

The mouse itself is super comfortable and offers satisfying clickers. Speaking of clickers, this thing has 11 programmable buttons on it. In terms of lighting, there's an RGB-lit G logo on the palm-rest, and that's about it, so it's pretty discreet.

I am somewhat jealous of those who do pick up this deal, especially because you get the white accented model of the Logitech G502 SE Hero, whereas I'm stuck with the basic black.

Need a laptop to go along with your new mouse? Consider taking a look at our best Black Friday deals and best Cyber Monday deals hubs to see more hot products on sale.