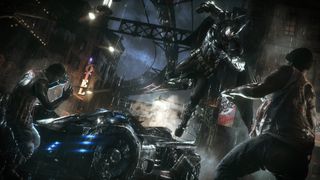 Microsoft has recently expressed interest in purchasing Warner Bros. Interactive Entertainment from AT&T, which would put a handful of talented studios in their lap, possibly making the Xbox exclusive lineup far more impressive.

Earlier this June, AT&T publicly announced that it wanted to sell off WB Interactive, the gaming division of the Warner Bros. brand.

Some of the most popular games that fall under this umbrella include the Batman: Arkham franchise, Injustice: Gods Among Us, Mortal Kombat, Middle-earth: Shadow of Mordor, and the upcoming untitled Harry Potter game.

Many companies, including Activision Blizzard, Electronic Arts and Take-Two Interactive have already expressed interest in purchasing WB Interactive, but nothing is official as of yet.

This deal could cost the buyer up to $4 billion, and it's possible the purchaser would only license the properties, meaning AT&T would continue to own and get revenue from them.

The buyer would have to strike some sort of deal and get a temporary license with AT&T for each independent property they want to use. AT&T would also likely get a pretty lofty sum from the sales since they'll still own those IPs. This essentially means the $4 billion deal is merely to purchase the studios, not the properties they're known for making.

Microsoft showing interest in buying into this deal is exciting since it could mean their Xbox and PC developer lineup will have a handful of talented studios added to the pile. However, whether or not it's worth it for Microsoft, Activision Blizzard, EA or Take-Two Interactive to immediately spend $4 billion and then work with AT&T to gain a temporary license for these properties remains to be seen.