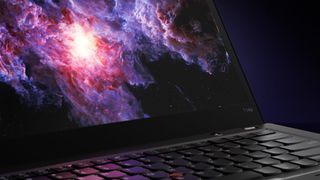 Lenovo is launching a slew of new ThinkPads. Among them are the company's latest T-series laptops: the ThinkPad T14s, T14 and T15.

The ThinkPad T14s is offered in black (CF hybrid lid) or silver (aluminum lid). It's the slimmest of the bunch, coming in at 13 x 8.9 x 0.6 inches and 2.8 pounds (although size and weight fluctuate based on configuration).

Regarding ports, you'll get two USB-A 3.1 inputs, one Thunderbolt 3 port, one USB Type-C port, a microSD card slot, an HDMI 1.4 port and a headphone jack.

For specs, you can outfit the ThinkPad T14s with up to a 10th Gen Intel Core i7 or a AMD Ryzen Pro 4000 CPU, 32GB of RAM, a 2TB PCIe SSD and Intel Integrated Graphics.

For audio, you'll get a Dobly Audio speaker system and two far-field mics. As for security, the laptop comes with a fingerprint reader, an IR camera, a privacy shutter, a TPM 2.0 security chip and the option for a privacy display.

The ThinkPad T14s offers a 57Whr battery, so it's unclear what that means for battery life. Of course, if you spring for the 1080p model, it'll last longer than the 4K model.

The laptop is outfitted with two USB-A 3.1 ports, one Thunderbolt 3 port, one USB Type-C port, a microSD card slot, an HDMI 1.4 port, a headphone jack and an RJ45 port.

You'll also get the audio and security features as the other 14-inch laptop. However, the battery will downgrade to 50Whr, so you might get less endurance.

There aren't too many panels to choose from with this 15.6-inch laptop. There are two 1080p options: 250-nit non-touch and 300-nit touch. Meanwhile, the 4K panel is rated for 500 nits of brightness and offers Dolby Vision.

And once again, this machine gets the same audio and security features as the rest of the new T-series laptops. But, the ThinkPad T15 has a large 57Whr battery like the ThinkPad 14s.

Overall, the ThinkPad T14 seems like the most promising, as we'll get a neat combination of a 4K Dolby Vision and an Nvidia GPU packed in a slim chassis. But, we're excited to get all three notebooks -- the Lenovo ThinkPad T14s, T14 and T15 -- to our lab for testing and see what they can do. Stay tuned to our full reviews and benchmarks of ThinkPad T-series laptops.