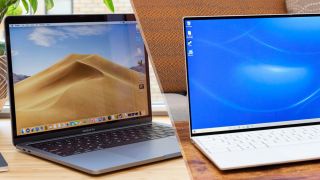 The new 13-inch MacBook Pro has finally arrived and you know what that means: face-off time. For this edition, we’re putting the MacBook Pro against the latest version of the Dell XPS 13. A perennial favorite of the Laptop Mag staff, Dell’s ultraportable is sleek, svelte and crazy powerful. And to raise the stakes, Dell finally shrunk down the final chunky border on the system for a near-bezel-less design. Oh, and you get over 12 hours of battery life.

But the new MacBook Pro also has some tricks up its sleeve. Apple finally listened to its consumer base and made some much-needed changes. First thing’s first: the Butterfly keyboard is officially dead, ushering in an era of comfortable typing via the Magic keyboard. Next, Apple doubled the storage capacity on each configuration. And lastly, the notebook has a 10th Gen processor and ridiculously-fast SSD, making it a formidable opponent.

But in this time-tested battle of premium ultraportables, which slender scrapper will emerge victorious? Let’s find out.

Apple’s pricing structure has stayed in place for the MacBook Pro. However, the company has doubled the storage on all its configs, and if you’re really big on storage, you can get up to a 4TB SSD. But let’s not get ahead of ourselves.

At first glance, you might think Dell hasn’t made any changes to the beautiful design of the XPS 13. That couldn’t be further from the truth. The XPS 13 is an exercise in subtle tweaks that add up to monumental changes. First off, Dell managed to find a way to shave some millimeters off the XPS 13’s frame, making it 2% smaller than its predecessor. It’s sporting a bigger touchpad, a keyboard with larger keycaps and incredibly slim bezels.

But it’s also a showstopper. I love the lid's Frost White, anodized aluminum finish, which is cool to the touch and just looks incredibly chic. Opening the lid, you get to enjoy Dell’s patented Arctic White glass-fiber weave; it is simply lovely.

However, that’s not to say that the MacBook Pro is an ugly laptop. It’s stunning. It’s just that the design is getting a little long in the tooth. You still get that elegant all-aluminum chassis that comes in either Space Gray or Silver. And that gleaming half-eaten piece of fruit on the lid is iconic and graces the counter of many a coffee shop and library. But there’s a reason the public gets into a frenzy when rumors start to arise hinting at any design change. It’s time for Apple to mix it up.

At this point, those chunky things are unsightly, especially when you look at the barely-there bezels on the XPS 13. In this iteration, they’ve shaved down the chin on the bottom to mere millimeters. It allowed Dell to squeeze a 13.4-inch screen that’s 6.8% bigger than its predecessor into that wee frame. The new screen also has a 16:10 aspect ratio, allowing for the highest-resolution panels we’ve ever seen in a laptop.

When I watched the trailer for Candyman, the detail was really sharp on both screens, so much so that I easily saw the raised peaks and ridges in a painting of the titular horror. However, when it came to color, the Dell was just a tad more colorful, which made the streams of blood all that more disturbing.

When it comes to vividness, the MacBook Pro and XPS 13 are neck and neck with the former reproducing 114% of the sRGB color gamut to the latter’s 115%. But on the brightness test, the MacBook is the clear winner, averaging 485 nits to the XPS 13’s 417 nits.

Both companies made changes to their keyboards. In the case of the MacBook Pro, it’s getting rid of that uncomfortable, unreliable Butterfly keyboard once and for all in favor of the Magic keyboard. It’s got just enough feedback to keep my fingers from bottoming out and there is a nice click. It’s much better than the old keyboard.

Dell has increased the size of its keycaps by 9% and managed to not downsize any of the keys. The keys are comfortable, but I wish they had a bit more bounce.

When I took the 10fastfingers typing test, I scored 76 words per minute on the MacBook Pro and 71 wpm on the XPS 13.

There were some clear differences on the synthetic tests. On the Geekbench 5.0 test, an overall performance benchmark, the MacBook achieved 4,399, sailing past the 4,171 premium laptop average.  However, it was no match for the XPS 13, which hit 4,648.

We also ran the PugetBench Photoshop benchmark, which loops through 21 different photoshop tasks three times per run. The XPS 13 reached 657 while the MacBook Pro hit a score of 569.

Equipped with integrated Intel Iris Graphics, neither laptop is going to play any graphics-intensive games. But both systems can definitely hold their own on some light photo and video editing tasks. The MacBook Pro reached 18 frames per second on the Sid Meier's Civilization VI: Gathering Storm test. That was enough to defeat the 13-fps category average, but not the XPS 13’s 19 fps.

Power and endurance, get a laptop that can do both. The XPS 13 lasted 12 hours and 39 minutes on the Laptop Mag Battery Test (continuous web surfing over Wi-Fi at 150 nits of brightness). The MacBook Pro clocked in with 10:21.

The Dell XPS 13 knocked out the MacBook Pro with a stiff 4-punch combination. The laptop’s entry-level system starts at $1,199 and gives you a current 10th Gen processor instead of an 8th Gen CPU for $1,299. The XPS 13 is smaller and lighter with premium good looks and with a Core i7 processor that has power to spare. And the notebook showed it could go the distance with more than 12 hours of battery life.

However, that doesn’t mean the MacBook Pro isn’t a great laptop. This recent iteration answers a lot of consumer requests, doubling the storage capacity and RAM. And most importantly, the 13-inch MacBook Pro joined the Air and 16-inch MacBook Pro and got a Magic Keyboard, parting ways with the oft-complained- about Butterfly keyboard. Plus, with its own 10th Gen processor, it can go toe-to-toe with most ultraportable laptops.