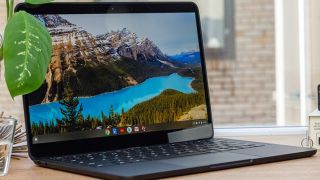 The best Chromebook deals are picking up steam this month. For frugal shoppers on the hunt for a new work or back-to-school laptop, a Chromebook is one of the best budget laptops to buy.

For a limited time, Amazon has the Google Pixelbook Go on sale for $898. Traditionally $999, this Chromebook is now $101 cheaper than its normal price. Rarely on sale, it's the lowest price we've ever seen for this laptop and one of the best Chromebook deals in town.

As we note in our Google Pixelbook Go review, it's one of the best Chromebooks to buy. We liked its bright display, solid performance and great battery life into a super-slim design.

As with all Chromebooks, the Pixelbook Go includes an additional 15 GB of Cloud storage and unlimited Google Photos storage. Even better, you'll have access to 100GB of additional storage for 12 months via Google Perks.

We review dozens of Chromebooks each year, and know which ones offer a great balance of value, performance and comfort.

So if you want a basic work from home laptop or a rugged machine for the kids, here are the best Chromebook deals you can get right now.

Google Pixel Slate (Core m3): was $799 now $499 @ Amazon
The Pixel Slate has an elegant design, sharp screen, and a comfortable keyboard (sold separately). It also lasts 10 hours on a charge. Amazon is currently taking $300 off this machine. View Deal