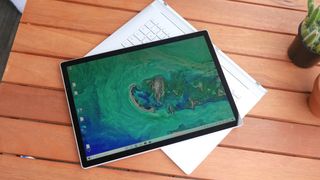 When Microsoft formally unveiled the new Windows 10 Start Menu in an Insider Preview Build 20161 blog post, it also mentioned some interesting changes coming to 2-in-1 devices.

As it stands, when you detach the keyboard on a detachable 2-in-1, a notification "toast" appears with the option to stay in desktop mode or switch to tablet mode. With this forthcoming update, Windows 10 will no longer display the notification after you remove the keyboard. Instead, it will automatically transition your device to the new tablet posture.

By removing this choice, Microsoft is killing an extra step that users need to take before they can transform their 2-in-1 device from a laptop to a tablet. This transition should also be quicker thanks to recent changes made to tablet mode.

Introduced in the May 2020 update, the revamped "tablet posture" was designed so users can continue using a familiar desktop experience when they enter tablet mode. To optimize the traditional desktop for touch, Microsoft increased the spacing between icons, collapsed the Search bar on the taskbar, rebuilt File Explorer for touch, and made it so the touch keyboard automatically appears when you press into a field.

Additionally, those who own a non-touch laptop will no longer have the option to switch into tablet mode using the quick action icon in the Action Center. Microsoft says this change is being made to "address confusion with some users getting stuck in tablet mode on non-touch devices."