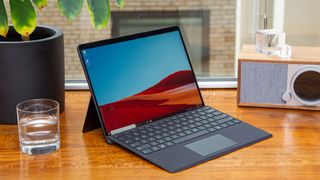 Microsoft's Surface Pro X should have been one of the best tablets of the year. It has a gorgeous display, a sleek design and long battery life.

But as we said in our Surface Pro X review, the experience is spoiled by app compatibility issues stemming from the tablet's ARM-based CPU. Now Microsoft is taking steps to reduce some of those pain points.

To start, Microsoft is giving Surface Pro X owners early access to native ARM versions of its upcoming Chromium-based Edge browser, as The Verge first reported. The browser will be made available today in a Canary channel (a pre-Beta) so tablet owners can get the benefits of a made-for-ARM app before it officially launches.

As a refresher, the reason native ARM apps are so important for Surface Pro X users is that the tablet's ARM-based SQ1 processor must run 32-bit, x86 apps through an emulator. Running an x86 program, like Google Chrome, through an emulator causes some performance hiccups, as we saw in our testing.

Microsoft doesn't hide that fact, "[On] any ARM64 processors, more software is involved in the emulation, and performance suffers as a result," the company wrote on a support page for its WOW64 emulator.

Before Microsoft made Chromium Edge for ARM available to Surface Pro X users, their only options were to download x86 versions of Edge or Chrome and run them in emulation mode. Now they can get the benefits of using an app made specifically for ARM.

The Verge has been testing the Edge Chromium for ARM browser and not only reports better battery life and performance but also "big improvements in switching tabs, rendering web content, and scrolling speeds."

You can download the ARM app from the Chromium Edge Insider site. Of course, the browser is in a pre-beta stage so don't be surprised if it crashes every now and then.

Not only is Microsoft making native ARM apps, but it's also expanding support for 64-bit x86 apps.

At least, for now. Neowin, citing unnamed sources, reports that Microsoft is hard at work to bring 64-bit app emulation to ARM-powered PCs. We don't know when it will launch but the report claims that a wide rollout could happen in the first half of 2021.

Even if Microsoft is able to bring x64 apps to ARM, there will still be the question of performance. So far, ARM-based chips — even the latest SQ1 processor — have fallen flat in the performance department, especially when compared to Intel CPUs. Users will need the proper hardware to run 64-bit apps after Microsoft figures out a way to support them through an emulator, so we're hoping ARM chips make significant strides between now and then.

Regardless, bringing x64 app support to ARM means devices like the Surface Pro X will be able to run every program a Windows 10 user might want to download.

By introducing new ARM apps and improving x86 compatibility, Microsoft is making the Surface Pro X a much more viable product. If only the company would revisit the Surface Pro X's exorbitant price, then it could have a killer tablet on its hands.