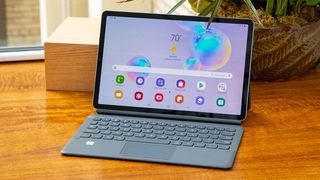 The Samsung Galaxy Tab S7 and S7+ rumors have shifted from a drizzle to a steady downpour now as we edge closer to a theoretical early August announcement at Samsung's Unpacked event.

We now have Geekbench benchmark testing for the larger Galaxy Tab S7+ uncovered by SamMobile and alleged confirmation of 120Hz displays for both the Galaxy Tab S7 and S7+ from frequent Samsung leaker @UniverseIce (via Android Community).

The news that both tablets will feature a 120Hz display shouldn't come as a big surprise, it's a feature that we saw the company introduce across the Samsung Galaxy S20 smartphone lineup this year. It was also a major spec deficit when comparing the last couple of Galaxy Tabs to the iPad Pros which introduced the feature with its ProMotion display in the 10.5-inch iPad Pro back in 2017.

The 120Hz refresh rate results in a much smoother experience that feels more responsive to the touch as well. There will be a couple of things to look for on the Galaxy Tab S7 and Galaxy Tab S7+ displays that our colleagues at Tom's Guide noted on the Samsung Galaxy S20 lineup.

On the plus side Samsung doubled the touch sampling rate on the screen to 240Hz, which made it feel even more responsive. But a potential serious negative if it carries over to these tablets was that the smartphones dropped to full HD rather than the native quad HD resolution when at 120Hz, this would be a tough pill to swallow on an 11-inch or 12.4-inch tablet.

Last week's leaked design and dimensions gave us a number of specs including a sizable 7,760 mAh battery in the Galaxy Tab S7 and potentially a trio of cameras on the back of the device, or a dual camera with a flash, but it was silent on what was inside the tablets.

While there wasn't much doubt regarding the CPU that Samsung would put in the Galaxy Tab S7 and S7+ these Geekbench benchmark tests will put any remaining doubt to bed. Both tablets will feature the Qualcomm Snapdragon 865, identical to that of the Galaxy S20 smartphones.

This was the only real option for Samsung as far as the CPU for a flagship tablet, but on a disappointing note the benchmark only shows 6GB of RAM for the tablet. The speculation is that the company will also offer an 8GB variant, but considering the Galaxy S20 smartphones all offer at least a base of 8GB of RAM we would have hoped to see these iPad Pro competitors hit that mark as well.

The Galaxy Tab line has been the only real high-end Android tablet competitor for some time now, our reviewer called the Galaxy Tab S6 an "excellent alternative to the iPad Pro" and the more recent Galaxy Tab S6 Lite "an excellent option if you want a basic tablet to watch videos, browse the web or use Android apps."

The Galaxy Tab S7 and S7+ hardware is certainly shaping up to be the best that Samsung has ever had, but whether it will be enough to actually move the needle versus the dominant iPad Pro remains questionable.