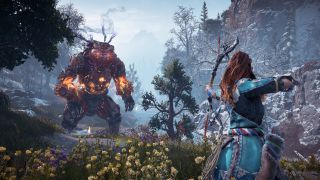 Horizon: Zero Dawn's PC port showed up on Amazon France this morning, which is convenient timing considering the rumors surrounding the game.

The listing was spotted by a user on ResetEra, and it details the game's name, the platform (Windows), and the publisher (Sony). The most interesting thing is that this listing indicates that Sony is handling the publishing of the PC port -- although this might just be a mistake.

Last month Kotaku confirmed recent rumors that Horizon: Zero Dawn was coming to PC. The speculation is that it would arrive sometime in February, and although it's already the end of the month, Horizon: Zero Dawn's third anniversary is on February 28.

It's unlikely that the game will launch for PC this week, but it's possible that Guerrilla Games will officially announce it on Friday. Regardless, we're likely to find out soon and are excited to see how Horizon: Zero Dawn will perform on PC.

Horizon: Zero Dawn won't be the first PlayStation exclusive to make its way to PC; Detroit: Become Human launched on PC back in December 2019 and Death Stranding is slated to launch on PC sometime this year.