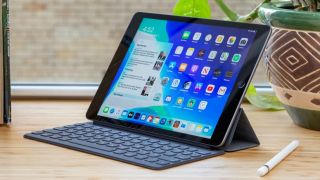 If you're shopping for a new iPad this Black Friday, then we've just found the deal for you. Amazon is selling the latest 10.2-inch iPad for $249, which is the lowest price we've ever seen for this model.

This is one of the best Black Friday iPad deals yet, and the savings apply to all configurations: Wi-Fi only and cellular models with 32GB and 128GB of storage.

It may be Apple's least expensive tablet, but the 10.2-inch iPad is a capable device. In our iPad review, we praised the slate for its long battery life, large, bright display, and keyboard support.

The iPad is the best option for people who want an Apple tablet but don't need the fastest performance. Not that the 10.2-inch iPad is a slouch in that department; You won't have any problems using the table for everyday tasks, like streaming videos, browsing the web or checking social media.

We're not sure how long this sale will remain available, so you might need to act fast. If you're in the market for any other gadgets this holiday season, see our Black Friday and Cyber Monday hubs.