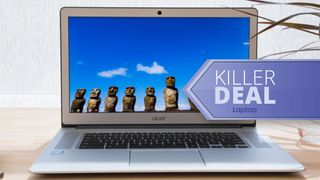 The Acer Chromebook 15 is a solid buy when you're looking for a 15-inch budget laptop. Thanks to a Chromebook deal at Best Buy, you can snag the cheap laptop for under $200.

For a limited time, you can get the Acer Chromebook 15 for $199 at Best Buy. Normally $229, that's $30 off and one of the best cheap Chromebook deals you can get right now.  Even better, you can stack your saving with 30% off the Logitech M355 Wireless Mouse ($9 off) with your purchase.

This value bundle is one of the best laptop deals we've seen this season.

Acer makes some of the industry's best laptops and the Chromebook 15 is one of the best Chromebooks to buy.

Although we didn't review this exact model, we reviewed the 1080p Acer Chromebook 15 and liked its durable, metal design and solid keyboard. Its battery life was also impressive, lasting 9 hours and 7 minutes in our Laptop Mag Battery Test.

Since this Acer Chromebook packs a lower-resolution HD display and the efficient ChromeOS, you should be able to squeeze a full workday of battery life out of it.

With access to useful Chrome extensions along with Google Play apps for productivity and entertainment, the Acer Chromebook 15 is suitable for both work and play. The Acer Chromebook 15 packs an HDMI port, two USB 3.0 ports and a standard headphone jack. At just $199, this capable Chromebook is a great value.