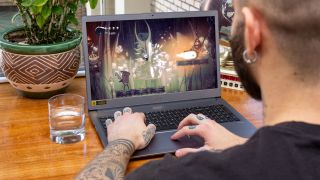 Even the best Chromebooks around are very limited in terms of software, especially for gaming. But as it turns out, Chrome OS users might be getting the Steam launcher sometime in the distant future.

In an interview with Android Police, Director of Product Management for Chrome OS, Kan Liu, implied that Google's Chrome team is working on cooperating with Valve to bring Steam to Chromebooks.

The next question on most people's minds is "well, can Chromebooks really play games?" And the answer is yes, of course. The best Chromebooks, especially premium ones with high-end CPUs like the Samsung Galaxy Chromebook, are capable of running games because they at least have decent integrated GPUs.

One issue here, however, would be storage, as most Chromebooks barely go past 128GB of eMMC storage, so that makes this ordeal a little tough. However, a laptop like the Samsung Galaxy Chromebook can get up to a 1TB SSD.

While the hardware is there to play less graphic-intensive games, it also comes down to the kinds of drivers and what kind of compatibility Chrome OS needs to get the games up and running.

Liu didn't give Android Police a time frame for this project, but she did say that Steam would somehow function through Chrome OS' Linux compatibility.

Another great feature on Steam is being able to Remote Play together; If there's a split-screen game, like Cuphead, you can hop in your friend's game as the second player through a stream that connects your laptop to theirs. Alternatively, you can stream games from a PC with Steam that's on your network, so you can lay in bed and game without having to get up.