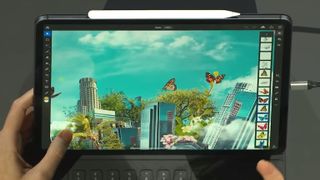 Adobe's new Photoshop for iPad is getting slammed by negative reviews from users who feel they were misled into thinking the program would mirror the full desktop version.

“This app in its current state can’t add any filters, rotate canvas, missing tools, etc … Releasing these apps, asking consumers to pay for said release, then asking us to provide valuable feedback is nonsense," one user wrote.

Part of the problem is that Adobe set a high bar when it labeled the app "real Photoshop," a phrase that suggests the tablet version would come with everything offered on the desktop program. What Adobe actually meant is that Photoshop for iPad uses the same codebase as the desktop app and that you can sync files between the two programs to start up where you left off.

When it comes to features, however, Photoshop for iPad is far behind. That much is clear by the app's 2.1-star rating in the Apple App Store after 685 reviews.

“Feature-wise, it feels like a beefed-up, cloud-based version of their existing iPad apps and not ‘real Photoshop’ as advertised,” one user said.

Adobe's chief product offer, Scott Belsky, acknowledged the poor reviews in a tweet and clarified that Photoshop for iPad is simply an MVP, or minimal viable product, that needs to be updated over time. And that it can be "painful at first."

"If you try to make everybody happy w/ a v1, you’ll either never ship or make nobody happy. such feats require customer feedback to truly exceed expectations. you must ship and get fellow passionate travelers on board," he wrote.

Photoshop users will hopefully not have to wait long for those updates. Photoshop product manager Jenny Lyell spoke to The Verge about the difficulties of coding for iPad.

“At the end of the day, we don’t want you creating something [on the iPad], and it outputs differently," Lyell told The Verge. "That’s one of our architecture principles." Lyell also said Adobe would push out monthly updates "at the very least."

But it's already too late for some users who are shifting to Photoshop alternatives that not only pack more features but require a one-time purchase instead of a subscription plan (Photoshop for iPad costs $10 a month or is included with a Creative Cloud subscription that includes Photoshop on desktop).