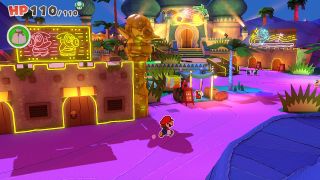 Out of the blue, Nintendo just dropped a trailer for a brand new Paper Mario game -- Paper Mario: The Origami King, which is slated to launch July 17, 2020. Now, this is how you announce a game.

Mario and Bowser team up for this epic-looking adventure to battle a new enemy (finally) that has transformed Princess Peach's castle into some sort of origami nightmare.

What really drew me in about the trailer was the very first scene. Ominous music plays as Princess Peach, now folded origami-style, asks Mario, "Will you crease yourself and be reborn, like me?"

The scene gave off a creepy tone that isn't typically found in traditional Mario games. However, the whole game doesn't seem to be like that, as Nintendo promises a "comedy-filled adventure."

There is a 19-second gameplay clip that looks pretty interesting. It gives off turn-based strategy vibes, but it's still unclear how this game will function.

I'm incredibly excited to get my hands on a Paper Mario game and see what they're all about. Paper Mario: The Origami King launches July 17, 2020.