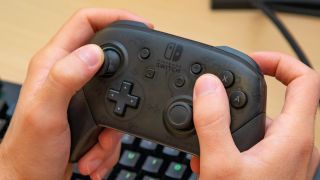 Keep in mind, however, that the update specifically deals with a recent issue where Nintendo Switch Pro Controllers couldn't properly connect, which results in incorrect Joy-Con controls. The update won't resolve any preexisting hardware issues.

Nintendo specifically describes the update as a solution to the following:

"We have fixed an issue where a Nintendo Switch console with system menu version 10.0.0 or 10.0.1 does not set up a new Nintendo Switch Pro Controller, sometimes causing incorrect joystick control."

If you're still having issues with joystick drift or joystick controls, we recommend contacting Nintendo's support team for help. If worse comes to worst, you might have to shell out money for a new controller, unfortunately.

In the previous update, Nintendo made it so you can transfer any downloadable software update, data or DLC from the Nintendo Switch to your designated SD card. On top of that, you can also remap the controller buttons on Nintendo Switch.