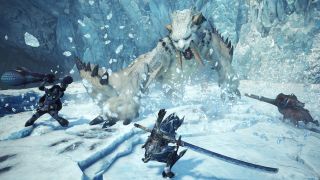 While it has been stated previously, Capcom's management was once again asked if there were any plans to port Monster Hunter World over to Nintendo Switch during a shareholders meeting. The answer was simply "no."

However, when Capcom was asked if it would consider developing a new Monster Hunter game that could be popular with high-school kids, the company said "yes."

Due to Monster Hunter World's lack of portability, it's not as popular with Japanese high-school students, which is why Capcom is likely keen on developing a Monster Hunter game specifically for the Switch.

Capcom also hinted at developing a new Monster Hunter game for the Nintendo Switch back in 2018 as well, so it's not a big surprise that one might be on its way. However, this could have been referencing the Monster Hunter Generations Ultimate that launched on the Switch in 2018.

However, if a new game is coming down the pipe for the Nintendo Switch, it's likely to look a lot smoother and cleaner than Generations Ultimate (I just hope that Capcom manages to ditch the long loading screens).

Stay tuned for more Monster Hunter news as we are very much in the E3 swing of things.