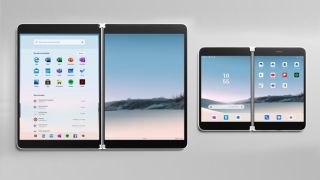 The purpose of this release is to show developers how their apps and websites will appear on dual-screen interfaces on both Android and Windows 10X.  Why Android? Remember, Microsoft's Surface Duo runs Google's mobile OS.

How apps will appear on dual-screen devices

Microsoft says apps will appear on a single screen by default but a simple gesture can expand the app across both screens when the device is in "double-portrait" or "double-landscape" modes.

The company didn't go into much detail on the other modes enabled by dual-screen devices but a graphic shows all the ways you can view content. Other views include having visual content on the right screen and text on the left side, or putting full-page content on both panels in what I like to call Book Mode.

Developers could also put companion content on the right-side display while running the app on the left, similar to how the Nintendo 3DS or Wii U work.

Along with these "initial app patterns" Microsoft is giving devs a basic checklist for touch and pen inputs as well as drag-and-drop.

You can download the preview SDK for Microsoft Surface Duo today and access supporting documentation and samples.

Microsoft is also giving developers access to an Android Emulator with a preview of a Surface Duo image. Integrated into Android Studio, the emulator lets you test your Android apps without using an actual device. By simulating postures, gestures, hinge angles and even mimicking the seam between the two devices, the emulator gets you the next best thing to an actual dual-screen device to test on.

The preview SDK for Windows 10X will be available in Spring 2020. By that time, we should know a lot more about Microsoft's vision for dual-screen devices.

If you're intrigued by the Surface Neo or other dual-screen devices (like Lenovo's ThinkPad X1 Fold or the Dell Concept Ori and Duet) then tune into Microsoft 365 Developer Day on Feb 11 for more on "dual-screen experiences."

We expect Microsoft to reveal more information at its Build conference in May, so check back in with us for further coverage of Windows 10X and dual-screen PCs.