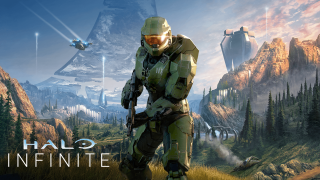 Halo Infinite is months away and we have no clue what the game is about or even what gameplay to expect out of the highly anticipated next chapter of the Halo saga.

However, tomorrow we're going to get a deep dive into everything Halo Infinite at the Xbox Series X game event. But before that, 343 Industries unveiled Halo Infinite box art, which reveals many new details about the game. Here's what we noticed.

Before the box art was revealed, we got a teaser about The Banished, the main antagonists in Halo Wars 2, coming back.

In a close up of Master Chief's helmet, you can see a reflection of what looks to be a Brute decked out in heavy armor holding a gravity hammer. Which Brutes are decked out in that much armor? Well, The Banished Brutes.

Now, let's talk about the giant elephant in the room, or rather, the giant Halo ring that's literally crumbling behind Master Chief. That Halo Array can only be one place, which is where The Banished are currently located. That place is either the Ark or Installation 9 because both installations were seen in Halo Wars 2.

The Spirit of Fire's crew as well as The Banished were located on The Ark, but Professor Anders found Installation 9 on The Ark and threw it into slipspace with herself aboard to signal for help in the fight against The Banished. However, The Guardian, which is loyal to Cortana, pulled the ring out of slipspace, and that's where Halo Wars 2 ended. So, that means Halo Infinite is likely going to take place on the Ark, which is where The Banished are.

Thanks for coming to my Halo Infinite TED Talk. Stay tuned for tomorrow's Xbox Games Showcase, which is where we'll find out more about Halo Infinite.