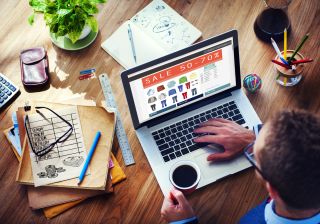 Father's Day is nearly here and dads and grads sales are going strong this weekend. Several retailers are offering generous discounts on some of the industries best laptops, tablets, headphones and more.

So if you're looking for a last minute gift for dad, you've come to the right place.

The latest Amazon Fire HD 8 packs a vibrant 8-inch (1280 x 800) display, up to 12 hours of battery life, and supports wireless charging. It's powered by a new 2.0-GHz quad-core processor which makes it 30% faster than its predecessor.

Looking for more gift ideas? We've got your back. Here are the best dads and grads sales happening right now.

Kindle Paperwhite: was $129 now $99 @ Amazon
The water-resistant Kindle Paperwhite features a 6-inch, anti-glare flush-to-screen display, a 5 LED front light and 8GB of storage. For a limited time, it's on sale for $30 off its regular price. View Deal

Bose Noise Cancelling Headphones 700: was $399 now $299 @ Amazon
The Bose noise cancelling headphones 700 offer stellar noise-cancelling technology and up to 20 hours of battery life. They also support Alexa, Google Assistant, and Siri. They're currently $100 off, which is the lowest price we've ever seen for these wireless headphones. Best Buy offers the same price. View Deal

Sony WF-XB700 Wireless Earbuds: was $128 now $98 @ Amazon
The Sony WF-XB700 earbuds are currently on sale for an all-time low price of $98. With their ergonomic design, water resistance, and 9 hour battery life (18 with charging case), you can enjoy uninterrupted, extended listening anywhere.  View Deal

Apple AirPods w/ Charging Case: was $159 now $139 @ Amazon
For a limited time, you can get the latest AirPods with Charging Case for $139. The wireless earbuds are powered by Apple's latest H1 chip for fast wireless connectivity with Apple devices.View Deal

Apple AirPods Pro: was $249 now $219 @ Verizon
With decent noise cancellation, good sound quality, and a comfortable, sweat-resistant design, the AirPods Pro are among the best wireless earbuds around. Score them now for their best price yet. Amazon offers the same price. View Deal

Sony WH-XB900N Wireless: was $249 now $178 @ Amazon
Sony WH-X900Ns wireless headphones feature Extra Bass, digital noise-cancelling, as well as Alexa and Google Assistant support. With up to 30 hours of battery life per charge, you can enjoy uninterrupted playback. They're now $70 off. View Deal

HP 24f 24" FreeSync Monitor: was $179 now $109 @ Best Buy
If you're looking for a cheap monitor, look no further than this HP 24-inch display. It delivers a crisp 1080p picture and sports an aluminum ultra-slim, micro-edge design.View Deal

Dell S2719H 27" Monitor: was $279 now $199 @ Dell
This beautiful Dell panel is a solid pick if you're looking for a monitor under $200. It features a near borderless 27-inch display, and dual 5W speakers that deliver premium sound. View Deal

Logitech Gamepad F310 Gaming Pad: was $24 now $19 @ Best Buy
The Logitech F310 is easy to set up and use with your favorite games thanks to XInput/Direct Input—the two most common input standards.