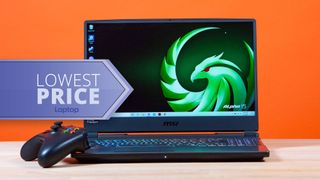 If you want to immerse yourself in PC gaming on a budget, this cheap gaming laptop deal is for you.

Currently, the MSI Alpha 15 is on sale for $799 at Newegg via a rebate. Normally $999, that's $200 off and the lowest price we've ever seen for this FreeSync gaming laptop. Even better, it's bundled with two freebies: an MSI 7NM LootBox Pack and a Radeon Game Bundle (a $179 value).

This is one of the best laptop deals we've seen all month.

Now on sale, the MSI Alpha 15 is one of the most affordable gaming laptops you can get.

In our MSI Alpha 15 review, we were impressed by its solid graphics performance, colorful, (1920 x 1080) display and comfortable keyboard with per-key lighting.

The Alpha 15's simple, matte black chassis doesn't flaunt gaudy red or blue colors like most gaming laptops. Instead, it has race car-looking curves on its hood, accented by MSI's green thunderbird logo.

In real-world testing, the Alpha 15's AMD Ryzen 7-3750H CPU with 16GB of RAM juggled 40 Google Chrome tabs and five 1080p YouTube videos while Shadow of the Tomb Raider ran in the background.

For a gaming laptop under $1,000, the MSI Alpha 15's powerful graphics card and colorful, 144Hz display put the competition to shame. At $200 off, it's a solid investment if you're in the market for a cheap gaming laptop.