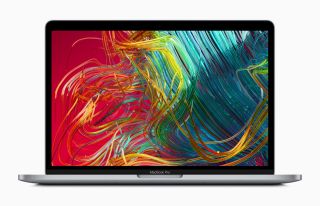 Months of rumors had us hoping for exciting changes to the new 13-inch MacBook Pro. Some speculated the laptop would increase the size of its screen to 14 inches and, in the process, trim the bezels. Instead, Apple did the bare minimum to get the 13-inch MacBook Pro to the point of being competitive with other laptops.

The highlights of the new MacBook Pro are its Magic Keyboard and 10th Gen Intel processors, the latter of which is only available on models $1,799 and up. For some, the new MacBook Pro is the perfect update, delivering everything from the previous model, but now with a comfortable and reliable keyboard.

Others, however, will bemoan the lack of new features or innovations found on the larger 16-inch MacBook Pro. Did Apple do enough to the new MacBook Pro to keep it competitive? Let's take a closer look.

There are few differences between the 2020 MacBook Pro and the previous 2019 version. The biggest improvement is the Magic Keyboard, which replaces the unreliable Butterfly keyboard found in previous models.

We compared the Magic Keyboard side-by-side with the Butterfly version and found that it provides a much better typing experience. More importantly, the new keyboard, which is actually the old keyboard from years ago, shouldn't run into the reliability issues that plagued the one it's replacing.

The other major update to the MacBook Pro 2020 is the arrival of 10th Gen Intel Core CPUs. These are Ice Lake processors, which means they come with Iris Plus graphics, but don't deliver as much performance as Comet Lake CPUs. Unfortunately, if your budget is below $1,799, then you're stuck buying the new MacBook Pro with 8th Gen CPUs. Along with a speedier CPU, the MacBook Pro 2020 can be configured with up to 32GB of RAM and 4TB of storage (up from 16GB of RAM and a 2TB SSD).

And that's pretty much it. Apart from the new keyboard and updated specs, the MacBook Pro is identical to its predecessor. It has the same design, same display, and, for better or worse, there is still a Touch Bar above the keyboard.

What the MacBook Pro doesn't bring

It's one thing for the MacBook Pro to not deliver what was promised in rumors, it's another to not offer the same features as the 16-inch model.

Instead of increasing the display of the smaller MacBook Pro to 14 inches and modernizing its design, Apple kept the same chassis as the previous version. As a result, the MacBook Pro, with its thick display bezels, looks outdated when compared to rivals like the totally bezel-less Dell XPS 13.

Speaker quality was another area where the 16-inch MacBook Pro saw huge improvements. It doesn't seem like the same will go for the 13-inch MacBook Pro as Apple lists it as having "stereo speakers with high dynamic range," which is the same description used for the previous model.

And while Apple upgraded the MacBook Pro's CPUs to 10th Gen Intel chips -- a mandatory requirement -- only models costing at least $1,799 come with the new chips. For comparison, you can get the new XPS 13 with a 10th Gen Core i5 CPU for $1,199.

Did Apple do enough?

We'll reserve our verdict for a full review (expect one in the coming days), but for now, the new MacBook Pro feels like an unexciting update. And yet, Apple did enough to make it a compelling option for those who prefer macOS or anyone looking for the best laptop under $2,000.

The new MacBook Pro doesn't fix the lackluster port selection or thick display bezels from the previous model, but the new Magic Keyboard will give Apple fans the quality reassurance they've been missing for several years. And more than the 10th Gen CPUs, adding the option for 32GB of RAM and 4TB of storage will recruit power users who might be looking at the 16-inch MacBook Pro or competing laptops like the XPS 15.

I'm still bummed Apple didn't give the MacBook Pro a redesign -- and the pricing for 10th Gen CPUs annoys me -- but I can't complain because the new laptop fixes the one thing that has been preventing us from recommending it as the best MacBook.