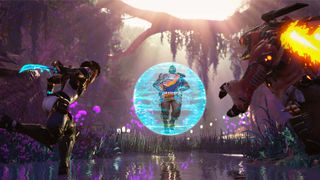 Amazon announced the release date for the PC game via a new trailer that shows off some of the game modes and gameplay. On top of that, Crucible will be available for free on Steam starting on day one. Amazon is actually serving as a publisher, while a game development studio within Amazon Game Studios, Relentless Studios, is developing the game.

Everything we know about Crucible

Instead of the traditional PvP style gameplay, like capturing objectives or going into team deathmatch-style battles, you have to battle the environment in order to survive as well.

You play as "Essence Hunters," and your objectives differ depending on the game mode you play. In Heart of the Hives, you compete in a 4 vs. 4 race to capture the hearts left behind by hive creatures. In Alpha Hunters, you take part in a massive deathmatch against teams of two. Finally, Harvester Command features two teams of eight that compete to capture the most amount of essence from essence harvesters -- it looks similar to a domination-style game mode.

Crucible features 10 hunters to choose from right now, which is a little weird, as that guarantees overlap in a game mode like Harvester Command. There should be at least 16 hunters in our opinion. The art-style, animations and smoothness of the gameplay in the video look satisfying, and since it's free, it's at least worth trying.

We imagine there will likely be cosmetics and possibly loot boxes of some kind in the Crucible, as Amazon needs to make its money somehow. We're excited to get our hands on Crucible later this month, so stay tuned for some impressions.

Amazon is also launching another game called New World, which we've yet to get a release date for. Unlike Crucible, it's not free, but it also isn't full price, at $39.99. Closed Beta access for New World starts in July 2020.