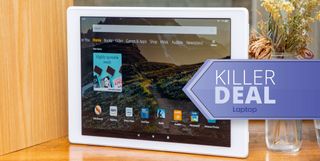 Looking for an affordable tablet that doesn't sacrifice performance? Then you'll want to take advantage of Amazon's huge sale on our favorite budget tablet.

Fire HD 10 Tablet: was $149 now $99 @ Amazon
With its bright, vivid display and speedy performance, the Fire HD is a solid choice if you're looking for an affordable tablet that you can take everywhere. At $50 off, it's an even better value. View Deal

The Fire HD 10 is bright and offers solid viewing angles. In real-world testing, playback was better than we expected for a budget tablet. It produces a max brightness of 403 nits, which is higher than the Lenovo Tab 4 10 Plus (400 nits) and the Fire HD 8 (307 nits).

Performance-wise, Amazon claims this slate is 30% faster than the previous model, which featured a 1.8GHz chip and the same 2GB of memory.

In terms of battery life, the Fire HD 10 outlasts its siblings. Our Laptop Mag Battery Test took 13 hours and 45 minutes to drain the Fire HD 10, which is more than 3 hours longer than the 10:26 tablet average.

The Fire HD 10 has Amazon Alexa built-in, so you can play and pause music, get local traffic reports, open apps, and set alarms on the Fire HD 10 using just your voice.

When it comes to affordable tablets out there, the Fire HD 10 packs the best screen and fastest performance. So if you want a tablet that looks great and performs well for under $100, the Fire HD 10 is an excellent value.