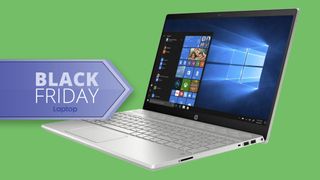 Update Dec 2: While HP isn't offering the Pavilion 15z for $429 anymore, the Cyber Monday price of $449 is still excellent.

For Cyber Monday, HP is selling one of its best entry-level laptops for an unbeatable $429.99. (It was $399.99 just a few minutes before we published this story.)

The base-configuration HP Pavilion 15z Touch in Mineral Silver sports a 15.6-inch 1366x768 touchscreen and runs Windows 10 Home. Under the hood are an AMD Ryzen 5 3500U CPU with Radeon Vega 8 integrated graphics, 16GB of RAM and a 256GB SSD.

HP Pavilion 15z Touch: Was $1,300 now $449.99
HP's midrange laptop is even more of a bargain, with a base configuration coming in at just over $400. You might want to spring for a higher-resolution screen and a faster Wi-Fi chip, but those aren't much more, and plenty of other options abound.View Deal

Apart from the screen resolution, the only downside to the base configuration is an out-of-date wireless chip that tops out an 802.11n Wi-Fi.