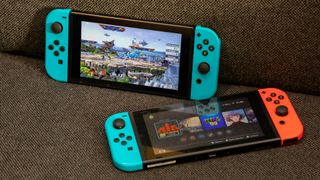 Nintendo has already told us that there will be no new Nintendo Switch this year, but as we edge our way towards the halfway point of 2020 the notion of a new Nintendo Switch in 2021 to compete with the PS5 and Xbox Series X seems entirely possible.

The question is what would Nintendo use to power the new Switch and our sister site Tom's Guide came up with an interesting option, the next-gen portable console could take a page from the playbook of the other next-gen consoles by looking to a partnership between AMD and Samsung to deliver a massive performance boost to the next Switch.

To be clear there is no specific rumor to indicate that this is going to happen, so you can go ahead and take this with a whole bucket of salt, but it's a fun hypothesis based on what is known of the available chips that could be utilized for a portable console like the Switch.

With that caveat out of the way, let's take a look at one possible future for the new Nintendo Switch.

The current Nintendo Switch is powered by an Nvidia Tegra X1 system-on-a-chip (SoC), but Nvidia has largely shifted its interests to SoC's designed for autonomous vehicles, rather than powerful mobile devices. While it's possible that Nvidia could be at work on something that would suit its Nvidia Shield TV and possibly a next-gen Switch, we don't really have any indication to suggest that.

So what do we have that would work? The partnership between Samsung and AMD that could yield an Exynos 1000 with AMD graphics. In a benchmark against a current top of the line Adreno 650 the RDNA-Exynos powered device delivered a 190% performance boost in some cases. While Samsung may be looking to fit that into the Galaxy S30 Ultra, it sounds more like the kind of power that could be useful for a portable gaming console.

With RDNA as the backbone of both the PS5 and the Xbox Series X, it would hardly be shocking for Nintendo to leverage the same platform for its console. Paired with the mobile expertise of Samsung and its Exynos chip it's easy to imagine a new Nintendo Switch the delivers vastly more power and battery life than the current model.