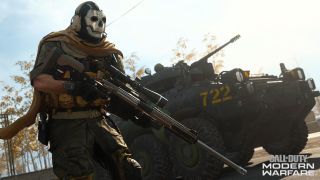 Explosions, helicopter crashes and whizzing enemy fire! Call of Duty: Warzone is here, and it's a free-to-play, cross-platform game that you can experience on your PC, Ars Technica reports.

The badass trailer for the battle royale game, trending at No. 5 on YouTube as of this writing, sends viewers on a wild visual adventure through a city dubbed Verdansk. Blood-thirsty, gun-wielding fighters race through the chaotic world with ATVs, rovers, SUVs, cargo trucks and helicopters -- and yes, as a player, you'll be able to wreak havoc through Verdansk in all the aforementioned modes of transportation.

There are two game modes in Warzone: traditional battle royale and plunder. The 150-player battle royal mode will support solo, duo and three-person teams as a menacing cloud of gas chases fighters to tighten the combat circle. The objective is simple: be the last squad standing.

In plunder mode, capped at 30 minutes, players will get to satisfy their inner pillager by looting cash; collect more cash than the opposing teams and you'll be victorious. Plunder also features contracts, which are objective-oriented tasks players can find throughout Verdansk that offers cash rewards for completion.

One unique feature of Warzone is its Gulag battle feature, which allows eliminated players to earn their spot back into the match through 1-vs-1 combat with other eliminated players. If one of your team members are a part of the Gulag queue, you can watch the fight from a balcony.

The first time you're eliminated in Call of Duty: Warzone, you're thrown into a Gulag where you have to 1v1 another random player who's been eliminated. Whoever wins gets to redeploy. pic.twitter.com/ZNZ5aiLoNcMarch 9, 2020

Warzone is a cross-play title, so you can enjoy the game with friends on different platforms.

You don't need to own Call of Duty: Modern Warfare to sink your teeth into this battle royale game, but if you do have Warfare, it will available for you today at 1pm ET. For everyone else, the game will be released today at 3pm ET for Xbox One, Playstation 4 and PC.