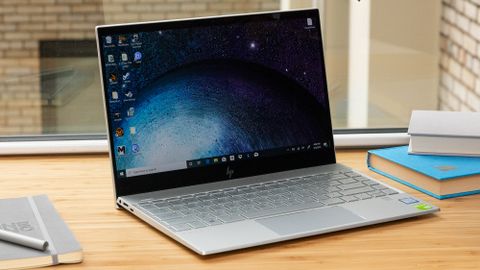 The HP Envy 13 is a near-perfect Ultrabook that offers fast performance, long battery life and a bright display at a reasonable price.

The new HP Envy 13 is everything I was hoping the new Apple MacBook Air would be: fast, attractive and affordable. That doesn't come as a surprise; the previous model ranked #1 on our best college laptop page for over a year. HP could simply have cloned that model, added new components and re-released it, and it still would have been one of the best Ultrabooks around.

Instead, the company gave us an even better version, with a more elegant design, a bright and vivid display, and top-notch speakers. Combine that with long battery life (on the 1080p version), a comfortable keyboard and a reasonable price and it becomes hard to see why anyone would buy the MacBook Air over the Envy 13. A

Yes, at this point, you should probably consider laptops with 10th Gen CPUs but the 8th Gen-powered Envy 13 is still a great option. It's also one of the laptops with best battery life.

We reviewed two versions of the HP Envy 13: the base FHD version with a Core i5 CPU and a 4K model with a Core i7 processor.

For just $20 more, you can upgrade from UHD 620 integrated graphics to an Nvidia GeForce MX250 graphics card while an extra $150 doubles RAM from 8GB to 16GB.

I can't remember the last time I reviewed an Envy, Spectre or EliteBook that didn't put Apple's MacBook design to shame. Echoing the look of its predecessor, this 2019 Envy 13 has a sleek, silver-metal frame with a stylish chrome HP logo centered on the lid.

Open the lid, and you'll find an interior that resembles that of the gorgeous Spectre x360. The most obvious similarity is the triangular pattern on the speaker grill located just above the keyboard. Some folks might complain about a lack of contrast between the laptop's silver keys and deck, but I quite like the pairing. I do wish HP hid the gray antenna strip underneath the chassis, but that's a small knock on what is otherwise a pristinely packaged notebook.

Also on the deck is a slim power button with an LED strip, opposite a fingerprint sensor. A chrome trim around the touchpad and some unobtrusive Envy and HP branding give this reasonably-priced notebook a premium aesthetic.

Adopted from HP's pricier Spectre laptops are the Envy 13's slim display bezels. While not as thin as those on some Dell and Asus laptops, the narrow black frame around the Envy's panel provides an immersive viewing experience without sacrificing the webcam.

The Envy 13 sits on its flat back edge, which drops below the base when you lift the lid and angle the deck slightly downward. From what we've seen on Asus and Dell laptops, the feature allows for a more comfortable typing experience and improved airflow.

Another clever feature is the Envy 13's concave edges. If you've ever owned an Ultrabook, then you know how hard it can be to open the lid. Inward-angled edges on the lid and base of the Envy 13 solve this problem by giving your fingers a place to grip.

HP used a clever expanding-flap mechanism called a "drop jaw" to fit USB 3.1 Type-A ports on each side of the Envy 13. You can use these inputs to connect legacy peripherals -- like mice, keyboards or external webcams -- without a dongle, but we worry about the long-term reliability of this extra moving part.

Also on the left side of the Envy 13 is a USB-C port and a headphone jack, while the right side has a microSD-card reader and a power jack.

Unfortunately, there is no Thunderbolt 3 port.

The 13.3-inch, 1080p non-touch display on the base Envy 13 is just as good as the 4K touch option, if not better. While both touch screen panels are very sharp and bright, the FHD version is even more vivid than the higher-res panel.

When I watched a trailer for the live-action adaptation of Mulan, I could see the intricate floral pattern in the warrior's traditional robe and the small beads stippled onto her helmet. Mulan's battle garb was a rich red, which stood out against a barren, snowy landscape. While the 4K screen looked plenty saturated, its colors didn't look any more lively than those on the 1080p display.

I found the Envy's 4K touch screen to be quite responsive when I scribbled some notes on a screen grab taken in Microsoft's Snip & Sketch app. I didn't have any problems using the on-screen keyboard to type URLs or draft emails, either.

My fingers appreciated the 1.2 millimeters of key travel on the Envy 13's keyboard, even though it doesn't reach our 1.5mm preference. I didn't bottom out as I wrote this review, which is something I can't say about most other Ultrabooks. The generous size and spacing of the island-style keys on the Envy 13 also make typing a joy.

That said, I'd change a few things about the keyboard. The paint HP used on the key caps has a slightly sticky feel, which slowed down my fingers. As did the weighty 81 grams of force required to actuate each key. Regardless, the Envy 13's keyboard is better than what we find on most slim laptops.

I typed at 119 words per minute with an accuracy rate of 94% on the 10fastfingers.com typing test, nearly matching my typical 119-wpm, 95% accurate result.

HP finally adopted Precision drivers and the  Envy 13's touchpad is better off for it. I had no issues executing Windows 10 gestures, like pinch-to-zoom or a four-finger tap to open the Action Center, on the 4.3 x 2.2-inch surface.

The 4K Envy 13 breezed through my real-world performance test, swiftly loading 20 Google Chrome tabs with multiple 1080p YouTubevideos playing in the background. I was then able to download the trailer for Mulan while watching Season 3 of Stranger Things on Netflix, all without any stuttering. The laptop's fans kicked on at this point, but they weren't bothersome.

Surprise, surprise -- our 4K Envy 13 came with a discrete graphics card. While the Nvidia GeForce MX250 GPU isn't meant for demanding gaming, it is a step up from integrated graphics as proven by comparing it to the UHD 620 GPU in the FHD model.

We played the racing game Dirt 3 at 92 frames per second on the MX250 model, which is well above our 30-fps playability, the category average (69 fps) and what the Surface Laptop 2 (82 fps) achieved. The ZenBook S UX391UA (45 fps) fell flat on this real-world test but ran better than the base model Envy 13 (31 fps).

I had a good ol' time groovin' to the sound of the Envy 13's crisp speakers. HP went all out with the Envy, placing dual speakers on the underside of the chassis along with a third, top-firing driver above the keyboard. Devon Gilfillian's funky jam "Here and Now" boomed smooth, soulful tunes throughout my small apartment. The twang of the electric guitar played nicely with the thudding percussion but never overshadowed Gilfillian or the female backup vocals.

Bang & Olufsen software comes preinstalled on the Envy 13, with equalizer controls so you can adjust the bass, midrange and treble to your liking. But even out of the box, you'll enjoy great sound without having to bust out your headphones.

Get an Envy 13 with the 1080p non-touch display if battery life is important to you.

The FHD model endured for 11 hours and 11 minutes whereas the 4K model lasted only 4 hours and 36 minutes on our battery test, which involves continuous web browsing over Wi-Fi at 150 nits of brightness.

The 720p webcam on the Envy 13 is nothing to write home about. A selfie I snapped in my dimly lit room was covered in a haze of visual noise. My beard and hair were unkempt blobs, while my eyes looked like they were drawn on by a pointillist painter. If there's one positive, it's that the lens captures natural colors and even extracted the different shades of gray in my T-shirt.

On the right edge of the Envy 13 is a physical kill switch that cuts the power to the webcam so you can feel reassured that nobody is snooping on you.

Leave the lapdesk at home - you don't have to worry about the Envy 13 overheating.

After I played a 15-minute, full-HD video in full screen, the touchpad on the HP Envy 13 with a Core i7 CPU rose to only 83 degrees Fahrenheit while the keyboard (87 degrees) and underside (90 degrees) also remained well below our 95-degree comfort threshold. Even the toastiest part of the machine, the lower-left edge on the underside, topped out at 94 degrees.

It's a shame that a laptop with such beautiful hardware ships with such ugly software. Pre-installed on this machine are entirely too many programs that could either be packaged together or omitted altogether.

HP provides an app called Audio Switch, which simply lets you switch your audio input/output between the internal speakers and headphones. As the same implies, HP's Command Center is where you can get information about your Envy 13 but also switch the thermal profiles between comfort and performance. Along with support documentation, HP also bundles in a setup program called JumpStart, a program for connecting printers and a redundant system-info app called Event Utility.

HP ships the Envy 13 with a one-year warranty. See how HP did on our Tech Support Showdown and Best and Worst Brands ranking.

The Envy 13 has cemented its standing as the ultimate laptop for college students or travelers. Along with 11-plus hours of battery life (on the FHD model), the Envy 13 has a sleek, ultraportable chassis, fast performance, and powerful speakers. Best of all, the Envy 13 starts at a reasonable $799, which is hundreds less than the competition. In many ways, the Envy 13 is what we wanted the new MacBook Air to be.

Just be sure to buy the right model. We strongly recommend the 1080p version over the 4K model because it lasts several hours longer on a charge and costs less. In fact, if we were reviewing the 4K model separately, we'd only give it a 3.5 rating. You should also consider the Envy 13 with a 10th Gen CPU, although we haven't gotten the chance to review it yet.

If you absolutely need a high-res display, the 4K Envy 13 is one of many good options. We also recommend the Samsung Notebook 9 Pro, which has a similarly premium design but much better battery life than the 4K Envy. The Microsoft Surface Laptop 2 is another recommended alternative, though you might want to wait a few months for the rumored Surface Laptop 3.

Overall, the HP Envy 13 is a fantastic laptop that checks all the right boxes --- as long as you buy the 1080p model.