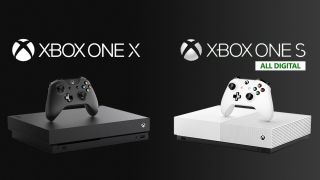 With the Xbox Series X on the horizon, Microsoft has decided to discontinue the production of the Xbox One X and Xbox Series S All-Digital Edition consoles. As reported by The Verge, Microsoft intends to focus its resources entirely on the next generation.

A Microsoft spokesperson told The Verge that the company is "taking the natural step of stopping production on Xbox One X and Xbox One S All-Digital Edition" so it can "ramp into the future with Xbox Series X."

However, it seems that the "Xbox One S will continue to be manufactured and sold globally.” This isn't particularly shocking considering the circumstances of COVID-19. Previous reports claim Sony's console production has been affected by the virus and the same could be true for Microsoft.

The Xbox One X has had quite some shelf-time, as it was originally launched in November 2017 and received critical acclaim for its increased performance over the Xbox One and One S. Consumers were also grateful that it was small and did not contain the notorious power brick. Interestingly, the Xbox One S All-Digital Edition just launched in April of last year.

Microsoft can afford to make this decision because its future consoles will be backwards compatible with the ones it just discontinued. Xbox largely intends to become a consistent brand of consumer-friendliness by providing as much accessibility as possible.

The Xbox One X and Xbox One S All-Digital Edition disappearing means the hardware will be unavailable, but when the Xbox Series X and the rumored Xbox Lockhart come out, past game libraries will be accessible on those consoles.