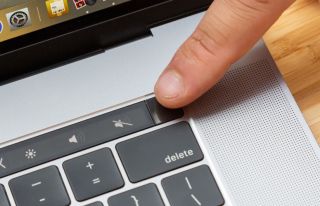 You will no longer need to sully the MacBook Pro Touch Bar with your fingerprints —touchless gesture controls may be in your future.

You can swipe, slide and tap the MacBook Pro's Touch Bar for easy access to volume adjustment, brightness management, Siri engagement and much more. But a new patent application (via Apple Insider), which calls the Touch Bar a "sensing strip," hints that Apple may take the Touch Bar's charm up a notch with over-the-air hand gestures.

"The sensing strip is supported by the lower portion of the housing and comprises a strip-shaped capacitive sensor having an array of capacitive sensor electrodes extending along an axis parallel to the edge of the keyboard, " the patent reads.

To unpack this quote, capacitive sensor electrodes can detect small changes in energy as your hand gestures above the Touch Bar, and the energy-sensitive strip will follow through with a pre-programmed command that corresponds with your hand waving or finger pinching.

The patent specifies that readable hand gestures could include Z-formations with one finger and lateral swiping motions.

Touchless hand gestures for the Touch Bar would be a huge benefit for rhythmic MacBook Pro typists who could get a more efficient typing flow that involves convenient over-the-air swiping.

AppleInsider points out that two of the three inventors behind the Touch Bar patent -- Adam T. Garelli and Senem E. Emgin -- were also cited as the inventors behind another recently discovered patent that could impel MacBook to drop the Smart Connector for a more bizarre, innovative keyboard feature.

New patents are surfacing that introduce new ways of interacting with the MacBook's Touch Bar and external keyboards, and we look forward to seeing how future iterations of the laptop enchant us with these strange new features.