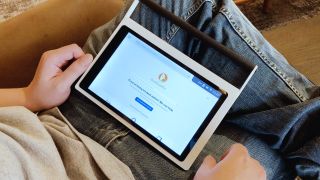 While the often rough or unfinished look of Raspberry Pi projects can be a part of the appeal of the little favorite computer of the DIY tech world, sometimes you want something a little more polished. If you like the idea of a Raspberry Pi-based tablet, but don't want to do the soldering yourself, the CutiePi Tablet may be the answer.

While it still has a bit of an industrial DIY feel to it, the CutiePi Tablet is a good-looking and completely open-source tablet with an improved mobile user experience on top that is currently on Kickstarter for as little as $189 if you get in soon enough (via SlashGear).

The CutiePi Tablet has an 8-inch HD touchscreen display (1280 x 800) and is 8.4 x 5.3 x 0.5-inches, which is impressive for a tablet with a Raspberry Pi inside. The company actually had to use the Compute Module 3+ Lite in order to get it to fit properly. Unfortunately, the system with the newly-released Raspberry Pi 4 module is not yet available.

The rest of the internals include a 5,000 mAh battery, WLAN 802.11 b/g/n wireless, Bluetooth 4.0, a 5 megapixel camera, and a speaker. As you might expect with a Raspberry Pi tablet, the port options are plentiful with a USB Type-A, USB-C, micro HDMI, microSD slot, and six GPIO pins.

The handle definitely sticks out as a unique feature of the tablet. It also functions as a stand, which allows the tablet to sit in a couple of positions for either watching content or typing.

No one is going to confuse the CutiePi Tablet for an iPad or a Samsung Galaxy Tab anytime soon, but it's the most appealing design I've seen for a Raspberry Pi tablet and all of those ports definitely make it an interesting device for the right user.

The hardware alone is interesting, but the CutiePi team has also come up with custom software that they are calling CutiePi shell which is a much more mobile-friendly user interface than the standard Raspberry Pi OS.

Beyond optimizing for the hardware itself, which they claim has resulted in much smoother operation as a whole. The team has added a number of additional touches like a battery and charging indicator, pinch-to-zoom and flick scrolling, and easy swipe to unlock.

Like the rest of the project, the software is completely open-source, built on Qt framework, so people are free to hack away on that and make it their own.

The project has easily passed its initial funding goal of $35,000 and has started unlocking stretch goals like a Sidekick mode that lets you use the CutiePi as a keyboard and trackpad when attacked to an external monitor. The next goals will include support for split-screen in CutiePi shell and finally support for porting Community-drive Ubuntu, Ubuntu Core, and LineageOS.

Standard warnings apply that this is a Kickstarter project and things can go wrong, so don't back it if you need a tablet right now. Still, the team is hoping to start shipping by November. At the time of publication, the $189 tier is still available, but the standard tier of $199 will still be a $30 savings versus the final shipping version.