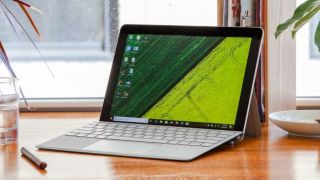 The long wait for a sequel to Microsoft's affordable Surface Go tablet is almost over. On Monday, a "mysterious portable computing device” made by Microsoft passed through the FCC, as spotted by Windows Latest.

Surface Go 2 isn't name-dropped on the documents but a model number, 1927, and codename "EV2" were previously used for the Surface Go and seen on benchmarks for what is believed to be the Surface Go 2. You can also tell from the low power wattage that this isn't the more powerful Surface Book 3 we're also anticipating.

FCC filings like this one can signal the release of a product in as soon as a few days. Combine the regulatory approval with a rumor from MSpoweruser that the tablet will arrive in the "coming weeks" and the launch of the Surface Go 2 appears imminent.

Pricing is still in question but blogger Dan Charlton uncovered retail listings for a Surface Project V that costs around the original starting price of the Surface Go (around $430). MSpoweruser says the Surface Go 2 will start at $399 and go up to $650 for the LTE model.

Surface Go 2 rumors paint a clear picture of what we should expect from the sophomore effort of Microsoft's budget tablet. An early rumor from Petri's Brad Sams claims the device will keep the familiar silver magnesium-alloy finish and rotating kickstand.

On the inside, the Surface Go is expected to upgrade its components from the Intel Gold chip to the Pentium 4425Y CPU on the low end and a Core m3-8100Y on the high end. According to leaker @_rogame, the slate will come with 8GB of RAM and UHD 615 graphics. A cheaper model will ship with 128GB of storage while the pricier one gets a 256GB SSD.

We'll keep a close eye on Microsoft in the coming days and provide you with coverage of the Surface Go 2, including a full review.