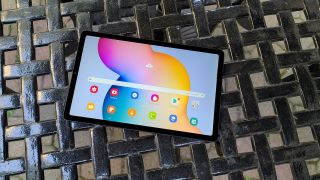 With smartphones getting bigger and more powerful every year, the case for tablets — particularly middle or lower-range models that don’t have a ton to offer beyond increased screen size — is getting progressively harder to make.

Samsung is pitching its new Galaxy Tab S6 Lite (starting at $349) primarily at students and others who need frill-free note-taking capabilities in an affordable, convenient package. Based on my time with the tablet, that seems like the right move.

Measuring 9.6 x 6.1 x 0.3 inches and weighing just over 1 pound, the Galaxy Tab S6 Lite is both substantial and portable enough for you to use without worrying too much. I was able to carry it comfortably in one hand (something I can’t do with the iPad Air), but if you have smaller hands you might have trouble.

The Galaxy Tab S6 Lite is available in three color options: Angora Blue, Chiffon Rose, and the Oxford Gray our unit sports. These are reflected in the included Book Cover case and S Pen (see below), so all of your hardware will match. I found the Oxford Gray is a moderately pleasing slate color, at least with respect to the back of the tablet, which we’ll discuss presently.

The front of the tablet is dominated by the 10.4-inch display, which is surrounded by bezels measuring about a third of an inch (though those on the left and right are slightly larger than those on the top and bottom).

It’s a readable screen, on par with what you’d find on a basic smartphone, but because the 2,000 x 1,200-pixel resolution is a bit above that of Full HD, you’ll have to cope with the black bands visible when you play standard 1080p videos.

The power and volume buttons are on the right side of the tablet; the USB Type-C charging port is, naturally, at the bottom.

There is a 5MP front-facing camera for video calls and an 8MP rear-facing camera for everything else. The latter is not a huge camera (though it does protrude from the back of the tablet), but it took surprisingly decent photos in broad daylight, only running into trouble with dark objects against a bright sky; otherwise, light colors did not look blown out, and some fine details were visible. No, this won’t replace any other camera you have, but it’s a step above other tablet cameras I’ve seen recently.

Although the dual AKG speakers on the Galaxy Tab S6 Lite don’t get ear-bustingly loud, they produce a reasonable amount of volume without too much undue distortion at high levels.

Phone fans, rejoice: The Galaxy Tab S6 Lite uses Android 10.0 as its operating system—you’ll find no DeX this time around. This means everything you already know about Android will carry over, as will the dizzying selection of apps available in the Google Play Store.

There’s not a lot new to say about the Android experience here; it works well with the tablet thanks to all the features and ease of use that have been polished into an impressive sheen over the years.

The case is where the Galaxy Tab S6 Lite becomes most obviously a value proposition. Cheap in construction, the Book Cover is just a way to protect the tablet,  store the S Pen and prop the tablet in viewing mode — it can’t be used as a keyboard. This might not be too bad if it were an exceptional case, but it’s not.

My model was a flat, unappealing matte gray, without the sparkle of distinction of the tablet’s back, and though it had a light texture on it, it felt self-consciously pebbly—as though the designers knew it needed some sort of feel, but couldn’t decide on anything interesting.

The magnet that holds the tablet in place is pretty weak, and my tablet wanted to fall out more than once if I nudged the back flap too hard. Plus, you need to maneuver the camera lens through a hole in the corner of the case to make sure it’s not obstructed—this was harder for me than it ought to have been.

As a result of all this, I found myself using the case less and less during the time I spent with the Galaxy Tab S6 Lite. It didn’t provide protection that made me feel good—it was, at best, purely decorative. In that respect, at least, the Book Case was well named.

The Galaxy Tab S6 Lite is powered by an eight-core Exynos 9610 processor and 4GB of RAM; default storage options are 64GB and 128GB, though it’s expandable up to 512GB with a microSD card. This hardware should offer enough performance for everyday use, but judging by its performance on our benchmark tests, it’s on a par with what you’d get from $250 phones. It’s not a speed demon by any stretch of the imagination, so don’t push it too hard and you should probably do fine.

My favorite aspect of the tablet was its battery life. Samsung touts “up to 12 hours” of video playtime thanks to the 7,040mAH lithium-ion battery, but on our battery test, which cycles through visits to a number of popular websites, the Galaxy Tab S6 Lite lasted even longer—just seconds less than 13 hours. How long a device stays powered depends a lot on how you use it, of course, but this is pretty impressive from a tablet that doesn’t dazzle in many (any?) other areas.

The Samsung Galaxy Tab S6 Lite is good at meeting modest needs and expectations — it doesn’t do a lot that’s special, but it also doesn’t pretend to. It’s a good supplemental option for those times when you need (or want) more screen real estate than your smartphone can provide, or if you just want something for reading, video watching, or game playing that you don’t need to worry about plugging into the wall every couple of hours.

The performance could be better, and a better Book Case for travel and protection would be a major improvement. But aside from those caveats, if you’re looking for a lower-priced tablet, the Galaxy Tab S6 package provides all you’re likely to need or want.