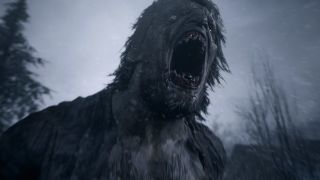 Resident Evil Village, or Resident Evil 8, finally debuted its first trailer at the PS5 Future of Gaming event, and between Chris Redfield and werewolves, we’re ridiculously excited about the future of Resident Evil.

After two back-to-back remakes, the story of Resident Evil finally continues, as a direct Resident Evil 7 sequel follows Ethan Winters back into yet another first-person survival-horror experience. Despite only seeing a short teaser, there were quite a few things revealed about the upcoming Resident Evil Village out of that trailer.

Here’s everything we know so far about Resident Evil Village.

We’ll jump into the monster-infested fray with Ethan once again when Resident Evil Village launches on the Xbox Series X, PS5 and PC (Steam) sometime in 2021.

There’s no official release date apart from sometime in 2021, but if history is any indication, Resident Evil Village might launch as early as January. And since Resident Evil 7 launched January 24, 2017, it kind of adds up.

“Okay, I got some clarification on why they made RE8 next-gen only, when it was cross-gen previously. With the updated graphic fidelity overhaul they're doing (still in progress), the way RE8 was designed lead to past-gen consoles having a lot of pop-in/long texture loads/load times because the game has you travelling through most of the Village and had a lot of load zones."

Dusk Golem continued, "Because there's a bigger focus on exploration this would lead to the last-gen console versions having notable issues, and it was holding back how pretty they could make certain scenes. So they decided to drop the last-gen versions of the game to make it so the game had no loading at all (not limited by last gen hardware) and push the graphic overhaul further without the limitations of last-gen tech in mind.”

As always, take unconfirmed information with a pinch of skepticism.

We did get some brief snippets of gameplay in the launch trailer at the PS5 Future of Gaming event. However, watching Ethan wave a pistol around isn’t really what I’d consider gameplay. In terms of already confirmed gameplay elements, there’s freaking werewolves!

I have a fleeting suspicion that the werewolf depicted in the trailer isn’t actually an enemy, but rather, Ethan himself going full werewolf. This is probably not the case, but given the Van Helsing vibes that this game is giving off, it would make sense.

"The return of a first-person perspective will bring a visceral edge to combat, as well," Kellen Haney, Capcom's associate manager of social media and community writes. "Each encounter is a personal fight for survival against terrifying foes, forcing you to keep a watchful eye on the environment and constantly looking for resources and enemies in unknown territory. With a greater focus on combat and exploration compared to Resident Evil 7, the village itself is just as important a character as any other, a location with a life of its own that will frequently keep you on edge as you discover its secrets."

In a Special Developer Message video about Resident Evil Village, producers Tsuyoshi Kanda and Pete Fabiano talk about some of the key aspects in the game. The video shows off the game running in-engine for a bit and even showed off the inventory management system. The inventory seems to be akin to the previous installments, such as Resident Evil 3. The video ended with the team stating that there will be more information coming at the end of this summer.

Despite the incredibly cryptic trailer, we have some idea about what’s going on in Resident Evil Village’s story. In the same PlayStation blog post, Haney wrote:

“Taking place a few years after the events of Resident Evil 7: Biohazard, in which protagonist Ethan Winters traveled to Louisiana to search for his missing wife, Mia, Resident Evil Village sees the reunited Mia and Ethan living happily together and putting their shared nightmares of the Baker’s plantation house behind them."

It goes on, "Finally able to move on from those horrifying events, Ethan’s world suddenly comes crashing down once again when Chris Redfield, an unexpected yet familiar face makes an appearance, setting off a chain of events that sees a distraught Ethan seeking answers to Chris’s shocking actions… and ultimately finding him in a mysterious village.”

That’s right, Chris Redfield is back, and it looks like he might actually be playing the villain this time around. As a fan, I’m a little disappointed, but I’ll reserve my judgement for when I actually get to play the game. I assume Chris has a damn good reason for doing what he’s doing. It is a little bizarre putting Chris in the crosshairs, however because, when it comes down to it, most fans care a lot more about Chris than Ethan.

In the aforementioned Special Developer Message video, both Kanda and Fabiano show off a piece of key art (located above) that’s supposed to give a major hint about what’s going on in the story of Resident Evil Village. I can only guess that it’s going to have to do something with a baby.

Going from a mansion to a village is very much like jumping from Resident Evil 1 to Resident Evil 4. When discussing the setting change, Haney wrote:

“Unlike the cramped corridors of the Baker mansion in Resident Evil 7, the fear of dark corners has been replaced with the anxiety of the unknown as Ethan searches for answers within decrepit buildings among snow-covered trees.”

I’m hoping that this means the environment will consist of open, explorable areas, similar to Resident Evil 4. If it’s true that Capcom cut current-gen compatibility so that Resident Evil Village (RE8) could have no loading screens in a relatively open space, then that very well may be the case.

Since Resident Evil Village is specifically designed for next-gen consoles in mind, it’s hard to even think about what kind of hardware this game will need. However, we can glean some specs from games like Resident Evil 7 and Resident Evil 3, which both run on the RE Engine.

Both Resident Evil 7, which is a bit older, and Resident Evil 3, which is the most recent entry (confusing, I know), had the same requirements. The minimum requirement included an Intel Core i5-4460 or AMD FX-6300 CPU, 8GB of RAM and an Nvidia GeForce GTX 760 or AMD Radeon R7 260x GPU. The recommended requirements consist of an Intel Core i7 3770 CPU or AMD equivalent, 8GB of RAM and a GTX 1060 GPU or AMD equivalent.

While CPUs and GPUs might need to be bumped up a bit, keep in mind that both the PS5 and Xbox Series X are going to be toting around super fast SSDs. Sooner or later, we might see some storage requirements, as loading will eventually become an issue.