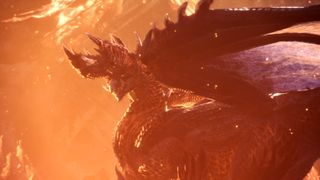 The fourth title update for Monster Hunter World: Iceborne was postponed back in April, but now we know the official date for when Alatreon shall cart us all: July 9. As someone who hung up their Switch Axe after sinking hours into the game, I'm terrified.

Two videos actually debuted today. One was a trailer showing off Alatreon and its brutal-looking self, while the other was a trailer for another developer diary coming on July 3 at 8:00 am ET, which will unveil gameplay and news.

Unfortunately, we still don't know much about this version of the Elder Dragon, but in previous iterations, we've seen them dealing out Dragon, Ice, Thunder and Fire damage, which is a wild combination to defend against.

In the past, the monster has been weak to Ice and Dragon in all forms, Water only while on the ground and Fire only while in the air. So while it deals out a variety of damage types, it's also weak to several as well.

Keep in mind that this information is based on previous games and Capcom can change things, so don't go building gear to take Alatreon on just yet.

We're likely to receive more information on July 3 at 8:00 am ET, so tune in to the Monster Hunter YouTube or Twitch stream if you have time.