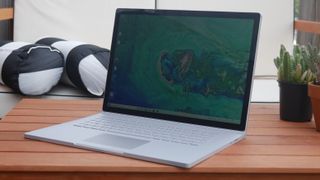 Surface Book 3 users are whipping out their pitchforks and shaking their fists at Microsoft. The 3.5mm jack on the pricey 2-in-1 device is reportedly causing a buzzing sound when headphones are plugged in, Windows Latest reported.

Microsoft Surface Book 3 owners flooded Microsoft's Community forum to seek a fix for their device's faulty headset jack. Interestingly, affected users seem to be owners of the 13-inch configuration (as opposed to the 15-inch model).

Surface Book 3 users are hearing an unusual buzzing sound emanating from their plugged-in headphones when they play audio on their 13-inch laptop/tablet hybrid device. Even when the volume is turned down to its lowest setting, the buzzing is still present. Users noted that the buzzing continues to persist about one minute after the sound is turned off.

"I'm hoping it's not a hardware issue because I just finished setting up the thing and I really don't want to have to return it," one user commented on the Microsoft support thread.

"After getting in contact with their support, Microsoft replaced my Surface Book 3 with a new one," another poster wrote. "Unfortunately, the new device was, again, affected by the buzzing."

A Microsoft representative posted a fix for the headset-jack buzzing issue, but unfortunately, many Surface Book 3 users reported that Microsoft's suggested resolution did not work for them.

However, a Surface Book 3 owner posted another solution to rectify the annoying buzzing, which it seemed to work for some users.

According to a poster called Florian Volk, updating one's drivers could possibly fix the Surface Book 3's headset-jack buzzing issue: "Intel released a new graphics driver 27.20.100.8336, which fixed the buzzing for me!"

The resolution, according to Volk, is to manually download Intel's latest drivers here. Users chimed in to pat Volk on the back and claimed that his or her's suggestion helped to fix the buzzing issue.

"It updated the Intel Graphics Driver to 8336, and also the Intel Display Audio driver (under "Sound, video and game controllers" in Device Manager) to 11.1.0.16. I'd take a wild guess to say that this was the problematic driver," a user wrote, saluting Volk.

This Surface Book 3 flub comes on the heels of Microsoft's Surface Laptop 3 cracked-screen PR disaster. The Redmond-based tech giant offered free repairs to customers plagued with cracked screens, so we look forward to see how Microsoft will rectify this headset-jack issue.

We reached out to Microsoft for a comment; we'll update this article if we receive a reply.