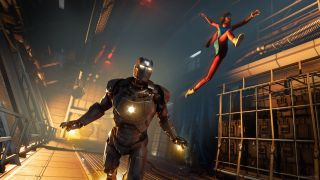 Marvel's Avengers has been officially confirmed for PS5 and Xbox Series X by Square Enix, so we will be seeing the Avengers assemble for the next-generation of consoles.

To top that off, if you buy Marvel's Avengers for PS4 or Xbox One, you'll get a free upgrade to next-gen.

What more we know about the Marvel's Avengers

"PS5 greatly lifts the performance and graphics bar for consoles," Crystal Dynamics Chief Technology Officer, Gary Snethen, wrote in a PlayStation Blog. "The new GPU allows us to increase our texture resolution, push a higher level of detail farther from the player, enhance our ambient occlusion, improve our anisotropic filtering and add a variety of new graphics features such as stochastic screen-space reflections with contact-aware sharpening."

Snethen confirmed that Marvel's Avengers would run at 60 frames per second at a 4K resolution, which is a solid balance between sharpness and smoothness.

In a Square Enix blog post, the company stated that it would have more details to share about Xbox Series X, Stadia, and PC specific features at a later date.

Snethen also boasts how the SSD will provide fast load speeds, enabling real-time streaming of "massive worlds." Snethen adds, "As Iron Man flies through content-rich levels, higher resolution textures and mesh will stream in instantly, maintaining the highest possible quality all the way to the horizon."

I've managed to get some hands-on with Marvel's Avengers, and it was fun, albeit a little simple. We're excited to see what the final product looks like on next-generation consoles.