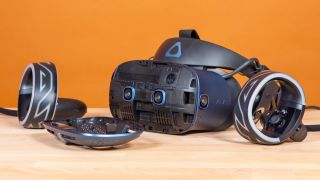 HTC just revealed a preview of its next-gen VR headset, Project Proton, which looks like a pair of glasses.

The Vive Cosmos Elite will arrive sometime in Q1 and preorders will begin on Feb. 24 for a hefty $899, while the rest of the headsets will launch at a TBD price and time.

We know almost nothing about the Project Proton other than what it looks like, which is very similar to a pair of glasses. The Project Proton is a prototype XR glasses that HTC is looking for feedback on.

There's also two models of the Project Proton, one that's wired with the whole glasses feel, and the other seems to be wireless and resemble a more compact, lightweight VR headset.

As it turns out, the Vive Cosmos Elite won't be changing very much from the original Vive Cosmos, so it offers the same 1,700 x 1,440 resolution per eye and the same exact halo headband.

However, for the extra $200 that you'll be spending, you'll get a pre-installed External Tracking Faceplate as well as a pair of SteamVR base stations. The headset also comes with two months of free Viveport Infinity subscription.

Since HTC is pining for a modular VR-headset, you can buy the External Tracking Faceplate for $200 sometime in Q2 if you already own a Vive Cosmos.

Since it has less accurate tracking, HTC says that the entry-level VR experience such as Viveport Video, Angry Birds VR: Isle of Pigs, The Curious Tale of the Stolen Pets and A Fisherman’s Tale.

However, if you do start off with the base model, you can upgrade to the Vive Cosmos' faceplate or the Elite faceplate for just $200.

In addition to the two new VR faceplates, HTC is pushing its headset for mixed reality with the Vive Cosmos XR. This headset's faceplate features two XR pass-through cameras for augmented reality that'll provide a 100-degree field of view.

HTC is advertising the Vive Cosmos XR mostly as a development tool. However, it's unclear if HTC will also be selling this faceplate separately.