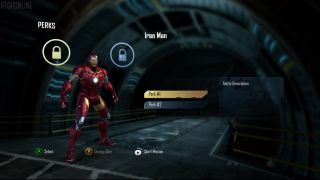 Footage from a canceled THQ-developed Avengers game has surfaced, revealing what could have been a first-person co-op action game to launch at the same time as the 2012 Avengers film released.

Back in 2011, THQ shut down the developers THQ Studio Australia and Blue Tongue Entertainment due to THQ's financial bankruptcy. Eventually, the Avengers license was picked up by Ubisoft, which developed Marvel Avengers: Battle for Earth for Xbox 360 and Nintendo Wii U.

The build was apparently found on a harddrive acquired by Obscure Gamers, a videogame preservation community. Andrew Borman, a digital games curator at the Museum of Play, uploaded the footage this week.

For a first-person co-op Avengers game, the footage actually doesn't look half bad, apart from the missing textures and unfinished animations. The game features Iron Man, Captain America, Hulk and Thor -- the classic team-up from the 2012 Avengers film.

A couple of things that you might notice is a news tracker for PvP DLC and skins, which is incredibly interesting to see in a build of a game that doesn't look anywhere near being done. However, given the type of gameplay, it would have made an interesting PvP game. Between the presentation and first-person-style gameplay, it almost reminded me of Overwatch.

While we'll never see this specific version of the Avengers come to life, we are getting a Marvel's Avengers game in the fall from Square Enix and Crystal Dynamics, which we're incredibly excited to play.