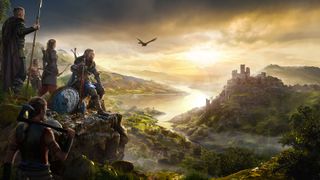 As we wait for more reveals, here’s everything we know so far:

Ubisoft first teased the reveal of Assassin’s Creed Valhalla by getting BossLogic to Photoshop the setting for roughly 8 hours. At the end of that stream, a date for the trailer was revealed, which went live on April 30, 2020. This is the cinematic trailer Ubisoft unveiled:

The trailer depicts a Viking Assassin battling out with England’s army. In the background, we hear the king of England talk about how the Vikings are brutal savages. However, we get close up shots of the Vikings enjoying their lives among family, and when raiding, sparing innocent people, which is an interesting contrast to how Vikings are typically depicted.

You play as the mighty Viking raider, Eivor, who can either be a male or female depending on what you choose. Your goal is to find a new home for your people, escaping Norway and landing smack onto England’s shores.

A very non-gameplay “gameplay” reveal of Assassin’s Creed Valhalla was showcased at an Inside Xbox event on May 7, 2020. The trailer showed off some gameplay from a very cinematic perspective, which didn’t really help highlight much. This is the “gameplay” trailer Ubisoft showcased:

As you could probably see, the lack of actual gameplay is jarring. Watching fixed combat animations from a cinematic camera angle doesn’t help anyone get a sense of what playing the game is like. However, we imagine that it’s going to be similar to Assassin’s Creed Odyssey. As far as weapons go, you’ll at least have access to a throwing ax, a spear and a hidden blade. Ubisoft has also stated that it has reworked character progression and skill trees, but didn’t go into too much detail.

There are also a lot of activities you can take part in, apart from kicking England’s ass. Ubisoft says that there are activities like hunting, fishing, dice and drinking games. There’s also a traditional Norse competition called flyting, which is basically a Viking rap battle of insults.

Assassin’s Creed Valhalla is set to take place in Norway and England in the 9th century, a time when the Vikings and the English fought over the British Isles. Since you’ll be traveling from shore to shore, there will be naval combat. One reason I loved Black Flag so much was because of the naval combat.

The $59 standard edition comes with the base game and that’s about it. Bumping up to $99 will net you the Gold Edition, which comes with the Season Pass (future access to new content, lands and gear) and a bonus mission available at launch. If you want the Ultimate Edition, you’ll get the previously mentioned DLC as well as the Berserker Gear Pack, Berserker Settlement Pack, Berserker Longship Pack and a new set of Runes, all for $119.

For $199, you can get all of the previously mentioned DLC as well as an 11.8-inch-tall female Eivor figurine, a 1.9-inch male Eivor Viking statuette, the game’s soundtrack, an exclusive steelbook and a set of three lithographs.

There’s no word on minimum or recommended requirements right now. All we have is an Epic Games Store listing that lists “TBA” for all of the specs, from CPU to GPU. Stay tuned for more info, but it’s safe to say that any of the best gaming laptops will be more than ready to run Assassin’s Creed Valhalla.

Assassin’s Creed Valhalla running at 30 fps on next-gen consoles like Xbox Series X and PS5 would be incredibly disappointing. It’s like being stuck at 720p when every other game around you is already on 1080p.